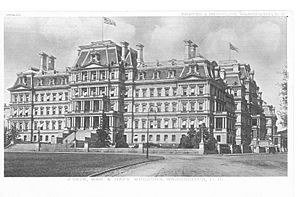 The building was commissioned by President Ulysses S. Grant. It was built between 1871 and 1888, on the site of the original 1800 War/State/Navy Building and the White House stables. It is built in the French Second Empire style which caused a lot of criticism at the time. It did not fit in with other government buildings in the city which were designed in the neoclassical style. Mark Twain said it was "the ugliest building in America." President Harry S. Truman called it "the greatest monstrosity in America." Historian Henry Adams called it Mullett's “architectural infant asylum.”

It is now listed as a National Historic Landmark.

It was for years the world's largest office building, with 566 rooms and about ten acres of floor space. In 1981, work began to restore the building. The main office of the Secretary of the Navy was restored in 1987 and is now used as the ceremonial office of the Vice President of the United States. Many White House employees have their offices in the EEOB.

All content from Kiddle encyclopedia articles (including the article images and facts) can be freely used under Attribution-ShareAlike license, unless stated otherwise. Cite this article:
Eisenhower Executive Office Building Facts for Kids. Kiddle Encyclopedia.