Clay County is a county located in the U.S. state of Tennessee. As of the 2010 census, the population was 7,861. Its county seat and only incorporated city is Celina. Clay County is named in honor of American statesman Henry Clay, member of the United States Senate from Kentucky and United States Secretary of State in the 19th century. Its current mayor is Dale Reagan.

Clay County was formed in 1870 by combining pieces from surrounding Jackson and Overton counties. Secretary of State Cordell Hull's first law office (now a museum) was located in Clay County.

Clay County's early inhabitants farmed and worked the Cumberland River, which was the major method of transportation in the Cumberland area. There were many docks and ferry crossings throughout Clay County to transport local crops and livestock to major markets. The timber industry was a major employer throughout the 1800s and 1900s and provides many jobs today. Tobacco farming became important in the local area throughout the 1900s and many old tobacco barns are still standing. With the end of government subsidies and with foreign competition, tobacco farming is minimal. Cattle and corn are the major agricultural influences today.

During the Civil War, many skirmishes took place up and down the Cumberland River to control the movement of barges laden with supplies. Local communities were split in their loyalties, with many families at odds with each other. Some of these animosities remain today between family groups.

The city of Celina is at the junction of the Obey and Cumberland rivers, and was a major port during the steamboat years between Nashville and Burnside, Kentucky. Although the Celina ferry landing no longer exists, Celina still connects the north and south by highway. Butler's Landing was used as a storage depot with large warehouses owned and operated by the Butler family. The first Clay County Court meeting was held in a store near the river at Butler's Landing on March 6, 1871. Butler's Landing nearly became the county seat, but Celina won the vote by a narrow margin.

Clay County's rural location and lack of major four-lane highway connections continues to hamper development and attraction of business and industry. This has resulted in the county having the highest unemployment rate in the state of Tennessee many months of the year and the loss of educated young people who have no opportunities locally. However, SR 52 is being upgraded to a 4-lane divided highway as part of the Corridor J project, which will connect to I-40 in Cookeville. . 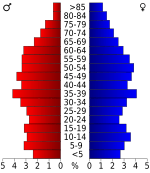 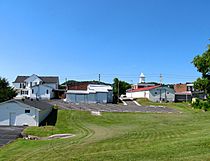 All content from Kiddle encyclopedia articles (including the article images and facts) can be freely used under Attribution-ShareAlike license, unless stated otherwise. Cite this article:
Clay County, Tennessee Facts for Kids. Kiddle Encyclopedia.