Macon County is a county located in the U.S. state of Tennessee. As of the 2010 census, the population was 22,248. Its county seat is Lafayette.

The county's second-largest city, Red Boiling Springs, thrived as a mineral springs resort in the late 19th and early 20th centuries. Three hotels from this period– the Donoho, the Thomas House (previously the Cloyd Hotel), and the Armour (previously the Counts Hotel)– are still open, though only the Armour still offers mineral water treatments. 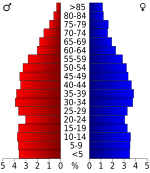 All content from Kiddle encyclopedia articles (including the article images and facts) can be freely used under Attribution-ShareAlike license, unless stated otherwise. Cite this article:
Macon County, Tennessee Facts for Kids. Kiddle Encyclopedia.