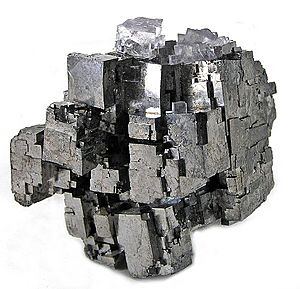 Galena-fluorite specimen from the Elmwood mine, south of Carthage

Smith County is a county located in the U.S. state of Tennessee. As of the 2010 census, the population was 19,166. In the section known as Middle Tennessee, its county seat is Carthage. The county was organized in 1799 and is named for Daniel Smith, a Revolutionary War veteran who made the first map of Tennessee and served as a United States senator.

Smith County was established in 1799 from a portion of Sumner County, and was named for Daniel Smith, a U.S. Senator and former Secretary of the Southwest Territory. The location of the county seat was hotly contested between Bledsoesborough (near modern Dixon Springs) and William Walton's ferry and tavern at the confluence of the Caney Fork and the Cumberland River. In 1804, voters chose Walton's site, and a town, named "Carthage," was platted the following year.

Smith County was the site of a large saltpeter mine. Piper Cave, located near Monoville, contains the poorly preserved remnants of dozens of saltpeter leaching vats. Most saltpeter mining in Middle Tennessee occurred during the War of 1812 and the Civil War, but the exact date of this operation is unclear. 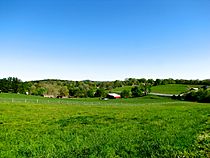 Houses and buildings near Gordonsville

According to the U.S. Census Bureau, the county has a total area of 325 square miles (840 km2), of which 314 square miles (810 km2) is land and 11 square miles (28 km2) (3.4%) is water. The county is located in a transition area between the rugged Highland Rim to the east and the flatter Nashville Basin to the west. The Caney Fork has its confluence with the Cumberland River in Carthage; these are the primary waterways flowing through the county. Cordell Hull Dam on the Cumberland is located near Carthage. 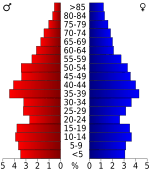 All content from Kiddle encyclopedia articles (including the article images and facts) can be freely used under Attribution-ShareAlike license, unless stated otherwise. Cite this article:
Smith County, Tennessee Facts for Kids. Kiddle Encyclopedia.