Wilson County is a county located in the U.S. state of Tennessee. As of the 2010 census, the population was 113,993. Its county seat is Lebanon. The largest city in the county is Mt. Juliet.

Wilson County was created in 1799 from a portion of Sumner County, and named for Major David Wilson, a Revolutionary War veteran and statesman. The county remained predominantly agrarian throughout the 19th century. The arrival of the railroad after the Civil War boosted the county's timber sector, and several large factories were constructed in the county during the early 20th century.

Wilson County was the site of an important saltpeter mine. Saltpeter is the main ingredient of gunpowder and was obtained by leaching the earth from Valley Cave. Valley Cave is located near Statesville. Numerous saltpeter hoppers still inside the cave indicate that this was a relatively large mining operation. These saltpeter vats may date from either the War of 1812 mining era or the Civil War mining era, or perhaps both. Further research is needed to determine when this mine was active.

According to the U.S. Census Bureau, the county has a total area of 583 square miles (1,510 km2), of which 571 square miles (1,480 km2) is land and 12 square miles (31 km2) (2.1%) is water. The Cumberland River flows along the county's northern border with Trousdale and Sumner counties. This section of the river is part of Old Hickory Lake. Several streams in the western part of the county are part of the Stones River basin.

Wilson County is home to a large concentration of cedar glades, a unique ecosystem where the soil is too rocky or shallow for trees to grow. Many of these glades are found in Cedars of Lebanon State Park. 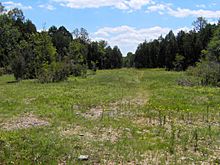 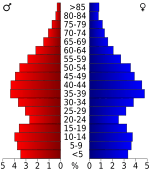 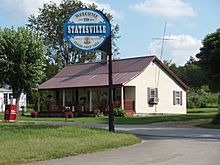 All content from Kiddle encyclopedia articles (including the article images and facts) can be freely used under Attribution-ShareAlike license, unless stated otherwise. Cite this article:
Wilson County, Tennessee Facts for Kids. Kiddle Encyclopedia.