DeKalb County is a county located in the U.S. state of Tennessee. As of the 2010 census, the population was 18,723. Its county seat is Smithville. The county was created by the General Assembly of Tennessee on December 2, 1837 and was named for Revolutionary War hero Major General Johann de Kalb.

DeKalb County was formed in 1837 from land in Cannon, Warren and White counties. Historian Will T. Hale believes that the first settlers in the county were at Liberty and came from Maryland in 1797. If so, Adam Dale was the first settler. He may have come over the Cumberland Mountains, although some sources claim he came down the Ohio, up the Cumberland to Nashville, and then overland about 56 miles.

DeKalb County was the site of several saltpeter mines, the main ingredient of gunpowder, and was obtained by leaching the earth from several local caves. Overall Cave was named for Abraham Overall who moved from Luray, Virginia, and settled near the present site of Liberty in 1805. He reportedly had many slaves and owned a large plantation on which Overall Cave is located. Two saltpeter leaching vats in the cave may date from the War of 1812, although this area was mined again during the Civil War. Other caves in DeKalb County that were mined for saltpeter include Avant Cave, located near Dowelltown, Indian Grave Point Cave, located in the Dry Creek Valley, and Temperance Saltpeter Cave, located near Temperance Hall. 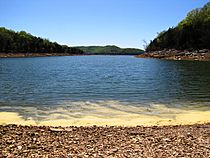 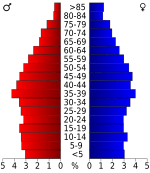 All content from Kiddle encyclopedia articles (including the article images and facts) can be freely used under Attribution-ShareAlike license, unless stated otherwise. Cite this article:
DeKalb County, Tennessee Facts for Kids. Kiddle Encyclopedia.