White County is a county located in the U.S. state of Tennessee. As of the 2010 census, the population was 25,841. Its county seat is Sparta.

On September 11, 1806, an act of the Tennessee General Assembly created White County out of Smith and Jackson counties, responding to a petition signed by 155 residents of the area. The county's original geographic area included all of what are now White and Warren counties, as well as parts of modern Cannon, Coffee, DeKalb, Franklin, Grundy, Putnam, and Van Buren counties.

The origin of the county's name is disputed. The county is officially held to be named for John White (1751–1846), a Revolutionary War soldier, surveyor, and frontiersman who was the first known white settler of the area. White had moved his family to the Cumberland Mountains from Virginia in 1789. However, some historians suggest the county was named for Revolutionary War soldier James White, the founder of Knoxville.

In 1840, White County became a destination for people from all over the country when Christopher Haufmann erected a large hotel on Bon Air Mountain, part of the Cumberland Plateau. The hotel was near some mineral springs as well as being at a high altitude; both were thought to promote health, and people came from far and wide for the "cures" advertised by the resort.

White County was the site of a very large saltpeter mining operation during the Civil War. The Cave Hill Saltpeter Pits (No. 1 and No. 2), located on Cave Hill near the mouth of England Cove, were intensively mined. Relics remain from that operation. Saltpeter is the main ingredient of gunpowder and was obtained by leaching the earth from these caves.

The Civil War deeply affected White County, although no major battles were fought in the area. As it was on the border between the largely pro-Union East Tennessee and pro-Confederate Middle Tennessee, the county was the scene of bloodshed from partisans (called "bushwhackers") of both sides. One famous Confederate guerrilla operating in the area was Champ Ferguson, who caused much mayhem and destruction before he was arrested after the war on May 28, 1865. Ferguson was tried by a military court, convicted and executed by hanging, one of only two Confederates executed for war crimes. He is buried in France Cemetery near Sparta.

Over the subsequent decades, White County slowly rebuilt from the ashes of war. The county was connected to the outside world by railroad, mainly because of the booming coal mining industries being started on Bon Air Mountain. The mountain was rich in bituminous coal, and enterprising local businessmen were quick to realize the profit potential that represented. Several mining towns sprang up on the plateau part of the county, including Bon Air, Eastland, and Ravenscroft. 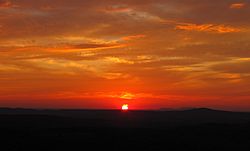 Sunset over White County, viewed from US-70 at the edge of the Cumberland Plateau

The Caney Fork, the county's primary drainage, flows across the southern portion of the county, and forms part the county's border with Van Buren, Warren and DeKalb. The river descends from the Cumberland Plateau to the Highland Rim through Scott's Gulf, a dramatic gorge noted for scenic waterfalls, most notably the 110-foot (34 m) Virgin Falls. The section of the Caney Fork in southern White County is part of Great Falls Lake, an artificial reservoir created by Great Falls Dam at Rock Island State Park. Downstream from this dam, the river enters a second reservoir, Center Hill Lake.

White County also boasts over 1,200 documented caves (over 3.17 caves per square mile), which makes White County one of the most cave-dense regions in the world. 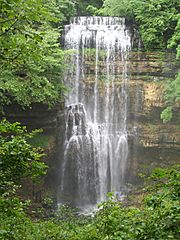 Blue Spring Cave, located five miles northeast of Sparta, is the longest mapped cave in Tennessee and the tenth longest cave in the United States, with 38 miles (61 km) of passages. The footprints of extinct Pleistocene (Ice Age) jaguars were discovered in the cave in 1990 by Bill Walter. 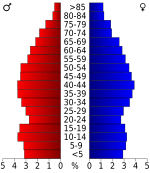 All content from Kiddle encyclopedia articles (including the article images and facts) can be freely used under Attribution-ShareAlike license, unless stated otherwise. Cite this article:
White County, Tennessee Facts for Kids. Kiddle Encyclopedia.