Warren County is a county located in the central part of the U.S. state of Tennessee. As of the 2010 census, the population was 39,839. Its county seat is McMinnville.

Warren County was created by European Americans in 1807 from a portion of White County, and named for Joseph Warren (1741–1775), a soldier in the American Revolution. The revised Tennessee State Constitution of 1834 stated that no new county could be within 12 miles (19 km) of the county seat of the county from which it was formed. The boundaries of five counties formed from Warren— Grundy, Van Buren, Cannon, Coffee and DeKalb— were exactly 12 miles from Warren's county seat, McMinnville, giving the county its distinctive round shape.

Warren County citizens remained loyal to the state of Tennessee during the War for Southern Independence. The county voted for independence from the union of States in February 1861 in a State referendum. Tennessee as a whole decided to remain in the union of states at that time. After Lincoln's call for invasion of neighboring states in April 1861, which was seen by Tennessee as a violation of Article 3 Section 3 of the U.S. Constitution, Warren County, along with now a majority of other Tennessee counties voted for independence in the following month of June 1861. Slavery was never mentioned as a cause in the declaration of Tennessee secession. Men from Warren county and surrounding upper Cumberland region formed and served in many units in Tennessee's defense including the 16th Tennessee Infantry [1] lead by McMinnville, TN resident Col. John Houston Savage. The Confederate monument [2] located next to the county courthouse is dedicated in the memory of the men who served and died in the 16th and list their names.

Historically dominated by yeomen farmers who owned few or no slaves, Warren County was the site of several saltpeter mines. Saltpeter is the main ingredient of gunpowder and was obtained by leaching the earth from several local caves. Hubbards Cave, near Camp Woodlee, was a major operation. Henshaw Cave on Cardwell Mountain (now part of Cumberland Caverns) and Solomon Saltpeter Cave on Ben Lomond Mountain were relatively small mining operations. Most saltpeter mining occurred during the War of 1812 and in the War Between the States. 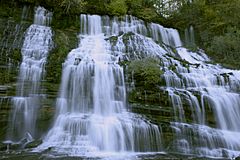 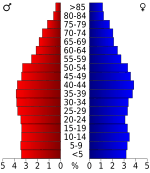 Rock Island State Park is located on the northeastern border with White County. This park is the site of the Tennessee Valley Authority's Great Falls Dam, includes many hiking trails, and offers whitewater rafting.

Cumberland Caverns, located east of McMinnville under Cardwell Mountain, is Tennessee’s largest show cave. It is the second longest mapped cave in Tennessee with 27.6 miles (44.4 km) of passages, and displays some of the largest underground cave rooms in eastern North America. Cumberland Caverns is the 15th longest cave in the United States.

Hubbard's Cave, the largest gray bat hibernaculum in Tennessee, with over 100,000 bats, is located in the county. The cave is owned by the Nature Conservancy and it is securely gated to protect the bats which are an Endangered Species.

Falcon Rest, an 1896 Victorian mansion in McMinnville, built by local manufacturer Clay Faulkner, is listed on the National Register of Historic Places. It is open to the public as a historic house museum. 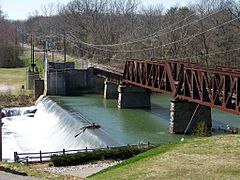 All content from Kiddle encyclopedia articles (including the article images and facts) can be freely used under Attribution-ShareAlike license, unless stated otherwise. Cite this article:
Warren County, Tennessee Facts for Kids. Kiddle Encyclopedia.