Van Buren County is a county located in the U.S. state of Tennessee. As of the 2010 census, the population was 5,548, making it the second-least populous county in Tennessee. Its county seat is Spencer.

Van Buren County was formed in 1840 from parts of White, Warren and Bledsoe counties. It was named for President Martin Van Buren. The county seat, Spencer, was home to Burritt College, one of the South's first coeducational colleges, during the 19th and early 20th centuries.

According to the U.S. Census Bureau, the county has a total area of 275 square miles (710 km2), of which 273 square miles (710 km2) is land and 1.1 square miles (2.8 km2) (0.4%) is water. The county straddles the western edge of the Cumberland Plateau, with the eastern portion of the county lying atop the Plateau, and the western portion lying on the lower Highland Rim. The Caney Fork, the county's primary drainage, forms part of its northern border with White County. The Rocky River, a tributary of the Caney Fork, forms part of the county's western border with Warren. Cane Creek, another tributary of the Caney Fork, drains the Fall Creek Falls area. 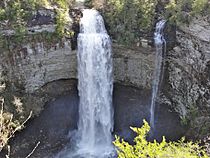 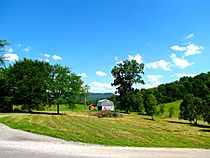 Big Bone Cave is located in the northwest corner of Van Buren County. It is one of the best-known and most historic caverns in Tennessee. It was mined by prehistoric Indians for gypsum and salts and was the site of the largest saltpeter mine in Tennessee during the War of 1812 and again during the American Civil War. The cave is named for the discovery of the skeleton of a Giant Ground Sloth (Megalonyx jeffersoni) by saltpeter miners in 1811. Many of the wooden saltpeter mining artifacts in the cave remain in a remarkable state of preservation, due to the extreme dryness of the cave. 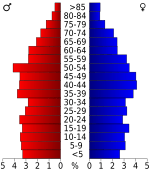 There were 2,096 households out of which 29.3% had children under the age of 18 living with them, 54.9% were married couples living together, 11.7% had a female householder with no husband present, and 28.0% were non-families. 24.3% of all households were made up of individuals, while 30.6% had someone living alone who was 65 years of age or older. The average household size was 2.43. 82.6% of occupied housing units were owner-occupied, meaning that 17.4% were renter-occupied.

All content from Kiddle encyclopedia articles (including the article images and facts) can be freely used under Attribution-ShareAlike license, unless stated otherwise. Cite this article:
Van Buren County, Tennessee Facts for Kids. Kiddle Encyclopedia.