Bledsoe County is a county located in the U.S. state of Tennessee. As of the 2020 census, the population was 14,913. Its county seat is Pikeville.

Bledsoe County was formed in 1807 from land that was formerly Indian Land as well as land carved from Roane County. The county was named for Anthony Bledsoe (1739–1788), a soldier in the Revolutionary War and was an early settler of Sumner County. He was killed in an Indian attack at Bledsoe's Station.

Like many East Tennessee counties, Bledsoe County opposed secession on the eve of the Civil War. In Tennessee's Ordinance of Secession on June 8, 1861, the county's residents voted against secession by a margin of 500 to 197. General James G. Spears, a resident of Bledsoe, served as a vice president at the pro-Union East Tennessee Convention in May and June 1861, and fought for the Union Army in the war. 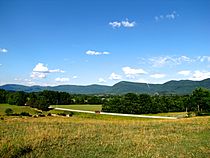 Northern Bledsoe County, with the Cumberland Plateau on the horizon

All content from Kiddle encyclopedia articles (including the article images and facts) can be freely used under Attribution-ShareAlike license, unless stated otherwise. Cite this article:
Bledsoe County, Tennessee Facts for Kids. Kiddle Encyclopedia.