Sumner County is a county located in the U.S. state of Tennessee. As of the 2010 census, the population was 160,645. Its county seat is Gallatin, and its largest city is Hendersonville. The county is named for American Revolutionary War hero General Jethro Sumner.

Sumner County was created in 1786, when Tennessee was still part of North Carolina. The county had been inhabited by Native Americans for centuries, as evidenced by Mississippian period mounds still visible at Castalian Springs. Longhunters traveled to the area as early as the 1760s, following Indian paths through the area. By the early 1780s, several outposts had been erected, most notably Mansker's Station, built by Kasper Mansker at modern Goodlettsville, and Bledsoe's Station, built by Isaac Bledsoe at Castalian Springs. 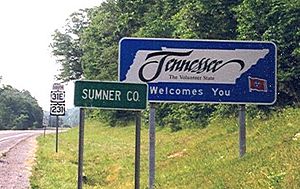 Sumner County is located in Middle Tennessee on the state's northern border with Kentucky. The Cumberland River was important in early trade and transportation, as it flows into the Ohio River to the west. Sumner County is in the Greater Nashville metropolitan area. 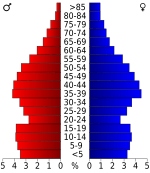 All content from Kiddle encyclopedia articles (including the article images and facts) can be freely used under Attribution-ShareAlike license, unless stated otherwise. Cite this article:
Sumner County, Tennessee Facts for Kids. Kiddle Encyclopedia.