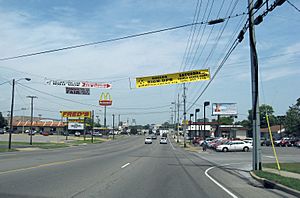 Gallatin is a city in and the county seat of Sumner County, Tennessee. The population was 30,678 at the 2010 census and 32,307 in 2013. Named for U.S. Secretary of the Treasury Albert Gallatin, the city was established on the Cumberland River and made the county seat of Sumner County in 1802. It is located about 30.6 miles northeast of the state capital of Nashville, Tennessee.

Several national companies have facilities or headquarters in Gallatin, including Gap, Inc., RR Donnelley, Beretta and Servpro Industries, Inc. Gallatin was formerly the headquarters of Dot Records. The city is also home to Volunteer State Community College, a two-year college with more than 70 degree programs.

Gallatin was established in 1802 as the permanent county seat of Sumner County, Tennessee, in what is called the Middle Tennessee region. The town was named after Albert Gallatin, Secretary of Treasury to presidents Thomas Jefferson and James Madison. Andrew Jackson became one of the first to purchase a lot when the town was surveyed and platted in 1803. The town was built around a traditional plan of an open square. Jackson founded the first general store in Gallatin.

In 1803 the first courthouse and jail were built on the central town square. In 1815, the town was first incorporated. In the mid-20th century, it operated under a Charter established by a 1953 Private Act of the State Legislature.

During the secession crisis just prior to the Civil War, the citizens of Gallatin hoped to remain neutral and were opposed to secession from the Union. Once the fighting began, however, they gave almost unanimous support to the Confederacy and volunteered to serve in defense of their state.

The Union Army captured Gallatin in February 1862, following Ulysses S. Grant's capture of Fort Donelson. Gallatin was strategic because of the railroad and its location on the Cumberland River, both of which the Union Army sought to control. In July 1862, General John Hunt Morgan recaptured Gallatin and held it until the Confederate forces fell back to Chattanooga in October. In November 1862, Union general Eleazar A. Paine retook the town and Union troops occupied it throughout the remainder of the war. Paine was notoriously cruel and was replaced in command before the end of the war. In her diary, a 16-year-old Alice Williamson described Paine's execution of alleged spies in the town square.

Following the Emancipation Proclamation in January 1863, slaves fled to the Union troops, who established a "contraband camp" at Gallatin. The slaves were fed and housed and put to work. Schools were set up in the camp so that both adults and children could learn to read and write.

The long enemy occupation drained the area of resources. Union troops lived off the land, confiscating livestock and crops from local farms. By the end of the war, there was widespread social and economic breakdown and dislocation in the area, accompanied by a rise in crime. Occupation forces of the Union Army remained in Gallatin for some time after the war, still living off the land.

In the aftermath of the war, many freedmen moved from the farms into town. At the same time, many white citizens moved from town out to farms to avoid the occupying troops. The area took many years to recover from the disruption of the war years, continued reliance on agriculture, and shift to a free labor system.

In the summer of 1873 Gallatin was devastated by an epidemic of cholera. In the single month of June, 68 people died, including many children. The disease swept through the South, brought by immigrants arriving in New Orleans, and spread by passengers traveling by steamboat and rail. Nashville had 603 fatal cases from June 7–29, with 72 people dying on the day of most fatalities.

Gradually through the late 19th century, Gallatin and its surroundings regained some steady growth. The area was primarily agricultural until the middle of the 20th century. By 1970, industrialization resulted in only half of the county population being considered rural. In 1992, Gallatin was surpassed by Hendersonville as the largest town in the county, though the former remains the county seat. Today it serves in part as a bedroom commuter suburb to the larger city and state capital of Nashville, Tennessee, some 30.6 miles to the southwest.

According to the United States Census Bureau, the city has a total area of 22.5 square miles (58 km2), of which 22.0 square miles (57 km2) is land and 0.5 square miles (1.3 km2) (2.18%) is water. Gallatin has variety of natural landscapes: open fields, forests, hills, and lakes. The city is located on Station Camp Creek, three miles (5 km) north of the Cumberland River, which was the chief route of transportation in the county's early years of settlement.

Old Hickory Lake, a man-made lake, built by the U.S. Army Corps of Engineers, is located south of the city.

There were 8,963 households out of which 32.5% had children under the age of 18 living with them, 48.0% were married couples living together, 16.1% had a female householder with no husband present, and 30.9% were non-families. 26.5% of all households were made up of individuals and 11.0% had someone living alone who was 65 years of age or older. The average household size was 2.50 and the average family size was 2.99.

Gallatin has a modern 10-screen theater, NCG Gallatin Cinema. It has a completely restored single-screen theater, called The Palace, built in 1908. There is also a public city library.

Annual events include the Sumner County Fair, held during the last week of August, the Gallatin Christmas Parade, and a Fall Festival held on the square.

Another annual event of note in Gallatin is the yearly Candlelight Cemetery Tour, held annually on the first Saturday in October. Held in the town's old cemetery (located close to the town square), actors and actresses depict various historical figures who lived in and around Gallatin during its 200 years of history—particularly those who lived prior to 1900—from lawyers and doctors to business people to various persons of note in the community. Information on these individuals is gathered from various historical documents (legal papers, family journals, etc.). The event is sponsored by the local Sumner County Historical Society in association with the local county museum (see below), and proceeds from the annual event go towards supporting the local museum.

The Sumner County Museum in Gallatin houses a number of artifacts of historical significance to the city and the county.

The city has several architecturally significant buildings listed on the National Register of Historic Places. These homes, which have been restored and are open to the public, are Cragfont, Rosemont, and Trousdale Place.

The Gallatin Civic Center has a swimming pool, a running/walking track, racquetball courts, and basketball courts.

Gallatin is home to one disc golf course:

Triple Creek is maintained by the City of Gallatin with assistance from the Sumner County Disc Golf Association (SCDGA). The SCDGA holds several events at Triple Creek DGC a month including Wednesdays Random Draw Doubles and a SCDGA Bag Tag that rotates between Triple Creek DGC and Sanders Ferry Park DGC.

All content from Kiddle encyclopedia articles (including the article images and facts) can be freely used under Attribution-ShareAlike license, unless stated otherwise. Cite this article:
Gallatin, Tennessee Facts for Kids. Kiddle Encyclopedia.