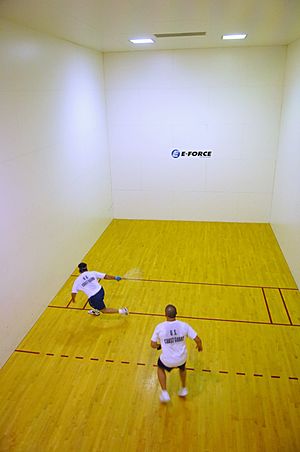 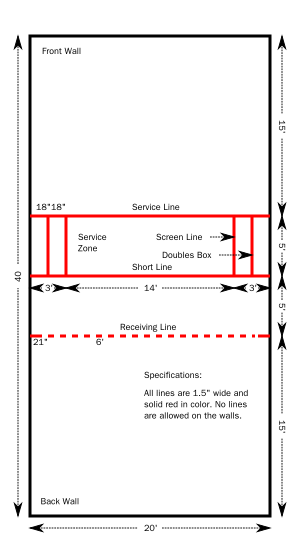 Racquetball is a racquet sport played with a hollow rubber ball on an indoor or outdoor court. Joseph Sobek is credited with inventing the modern sport of racquetball in 1950, adding a stringed racquet to paddleball in order to increase velocity and control. Unlike most racquet sports, such as tennis and badminton, there is no net to hit the ball over, and, unlike squash, no tin (out of bounds area at the bottom of front wall) to hit the ball above. Also, the court's walls, floor, and ceiling are legal playing surfaces, with the exception of court-specific designated hinders being out-of-bounds.

Racquetball is very similar to 40×20 American handball, which is played in many countries. It is also very similar to the British sport Squash 57, which was called racketball before 2016.

All content from Kiddle encyclopedia articles (including the article images and facts) can be freely used under Attribution-ShareAlike license, unless stated otherwise. Cite this article:
Racquetball Facts for Kids. Kiddle Encyclopedia.