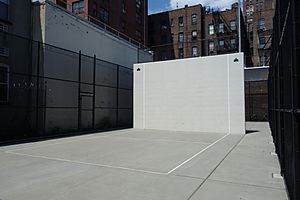 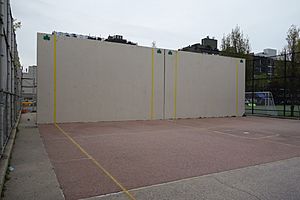 American handball is a sport in which players use their hands to hit a small rubber ball against a wall such that their opponent cannot do the same without it touching the ground twice. The three versions are four-wall, three-wall and one-wall. Each version can be played either by two players (singles), three players (cutthroat) or four players (doubles). 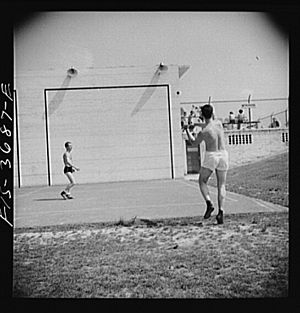 Handball courts behind a swimming pool

Games in which a ball is hit or thrown have been referenced as far back as Homer and ancient Egypt. A game similar to handball was played by Northern and Central Americans from 1500 BC, most famously by the Aztecs as the Mesoamerican ballgame.

The first recorded game of striking a ball against a wall using a hand was in Scotland in 1427, when King James I ordered a cellar window in his palace courtyard to be blocked up, as it was interfering with his game. In Ireland, the earliest written record of a similar game is in the 1527 town statutes of Galway, which forbade the playing of ball games against the walls of the town.

The first depiction of an Irish form of handball does not appear until 1785. The sport of handball in Ireland was eventually standardized as Gaelic handball. By the mid-19th century, Australians were playing a similar game, which developed into the modern sport of Australian handball. 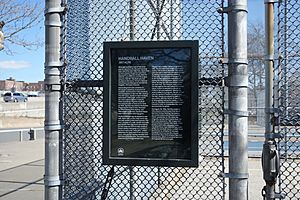 The earliest record of the modern game in the United States mentions two handball courts in San Francisco in 1873. The sport grew over the next few decades. By the early 1900s, four-wall handball was well established and a one-wall game was developed in New York City by beach-goers who hit bald tennis balls with their hands against the sides of the wooden jetties that lined beaches.

This led to a rise in one-wall handball at New York beaches and by the 1930s, thousands of indoor and outdoor one-wall courts had been built throughout the city. American handball is seen predominantly in parks, beaches, and high school yards in New York, Chicago and other large urban areas.

National championships in handball have been held annually in the United States since 1919. These championships were organized by the Amateur Athletic Union (AAU) until 1950, when their control was transferred to the newly formed United States Handball Association (USHA). 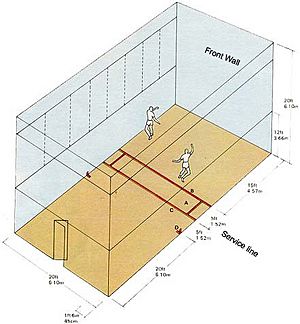 Dimensions of a typical handball court

In the middle of the floor lies a short line, dividing the floor into two 20 feet (6.1 m) squares. Also along the floor is the service line, which is 5 feet (1.5 m) in front of the short line. The service zone is the area between these two lines.

The back wall of the court is usually 12 feet (3.7 m) high, with an above gallery for the referee, scorekeeper and spectators. Some courts have a glass back wall and glass side walls to allow for better viewing. 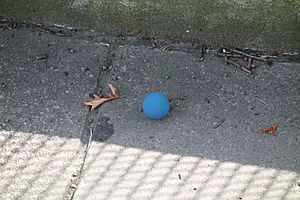 A typical outfit includes protective gloves, sneakers, athletic shorts and goggles. Eye protection is required in tournament handball, as the ball moves at high speeds and in close proximity to the players. It is rarely used in "street" handball, however, where a softer "big blue" ball is usually used.

The black or blue rubber ball weighs 2.3 ounces (65 g) and is 1.875 inches (4.76 cm) in diameter (smaller, heavier and harder than a racquetball), is hit with gloved hand (open palm, fingers, fist, back of hand) (informal games often don't include gloves). 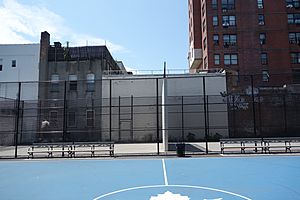 All content from Kiddle encyclopedia articles (including the article images and facts) can be freely used under Attribution-ShareAlike license, unless stated otherwise. Cite this article:
American handball Facts for Kids. Kiddle Encyclopedia.