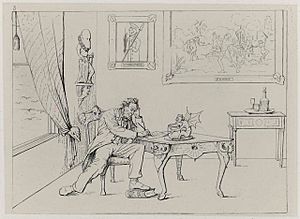 The Emancipation Proclamation was an order by U.S. President Abraham Lincoln to free slaves in 10 states. It applied to slaves in the states still in rebellion in 1863 during the American Civil War. It did not actually immediately free all slaves in those states, because those areas were still controlled by the Confederacy. It did, however, free at least 20,000 slaves immediately, and nearly all 4 million slaves (according to the 1860 United States census) as the Union army advanced into Confederate states. Until the Thirteenth Amendment to the United States Constitution in 1865, only the states had power to end slavery within their own borders. Thus, Lincoln issued the Proclamation as a war measure in his role as commander-in-chief.

The Proclamation made emancipation a goal of the Civil War. It also weakened efforts within England and France to officially recognize the Confederacy. As Union troops advanced into Rebel (Confederate) territory, they freed thousands of slaves per day. Many did not wait, but fled their owners to claim their freedom.

Five slave states (the Border States) had remained loyal to the Union and were not at war with the federal government. Thus, Lincoln did not have authority to free slaves in those states, and so this Proclamation was not applied in those states. The Proclamation also did not apply to Tennessee, nor to areas within Virginia and Louisiana which Union forces already controlled.

The Proclamation was issued in two parts. On September 22, 1862, Lincoln said that in 100 days, he would free all slaves in areas not then under Union control. On January 1, 1863, he named the ten states in which the proclamation would then apply: Texas, South Carolina, North Carolina, Georgia, Alabama, Mississippi, Arkansas, Virginia, Kentucky, and Louisiana. The five border states where slavery was still legal were exempt, and so not named, because they had remained loyal to the Union and were not in rebellion. Tennessee also was not named because Union forces had already regained control there. Several counties of Virginia that were in the process of separating from that state to form the new state of West Virginia were specifically named as exemptions, as were several parishes around New Orleans in Louisiana. 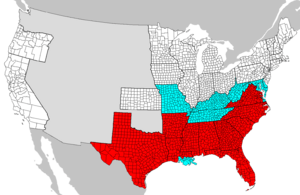 Areas covered by the Emancipation Proclamation are in red. Slave-holding areas not covered are in blue.

“[…] all persons held as slaves within any State or designated part of a State, the people whereof shall then be in rebellion against the United States, shall be then, thenceforward, and forever free; and the Executive Government of the United States, including the military and naval authority thereof, will recognize and maintain the freedom of such persons, and will do not act to repress such persons […]”
“Arkansas, Texas, Louisiana [except some named parishes], Mississippi, Alabama, Florida, Georgia, South Carolina, North Carolina, and Virginia, (except the forty-eight counties designated as West Virginia [and some other counties in VA])”

Only a small number of slaves already behind Union lines were immediately freed. As Union forces advanced, nearly all four million slaves were effectively freed. Some former slaves joined the Union army.

Before the war was over, some of the exempted border states ended slavery within their own borders. While the Proclamation had freed slaves, it had not made slavery illegal. Thus, Lincoln sponsored a constitutional amendment to ban slavery. The Thirteenth Amendment, making slavery illegal everywhere in the United States, was passed late in 1865, eight months after Lincoln was assassinated.

All content from Kiddle encyclopedia articles (including the article images and facts) can be freely used under Attribution-ShareAlike license, unless stated otherwise. Cite this article:
Emancipation Proclamation Facts for Kids. Kiddle Encyclopedia.