The 54th Regiment Massachusetts Volunteer Infantry was an infantry regiment in the Union Army during the American Civil War. They were nicknamed the "Swamp Angels".

The regiment was one of the first official African-American units in the United States during the Civil War. Many African-Americans also had fought in the American Revolution and the War of 1812 on both sides. 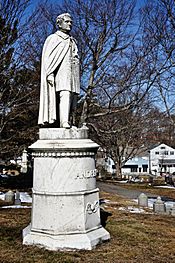 Statue of Massachusetts Governor John A. Andrew, who approved the creation of the 54th Regiment

In March 1863, after the Emancipation Proclamation, Massachusetts Governor John A. Andrew gave his approval for the creation of the 54th Riegiment. The regiment was commanded (led) by Colonel Robert Gould Shaw.

Secretary of War Edwin M. Stanton had decided that white officers would be in charge of all "coloured" units. Andrew chose Robert Gould Shaw to be the regiment's colonel, and Norwood Penrose "Pen" Hallowell to be its lieutenant colonel. Many of the other officers in charge of the 54th Regiment were from abolitionist families. Governor Andrew chose several of them himself.

White abolitionists (including Shaw's parents) recruited the soldiers for the unit.

The 54th trained at Camp Meigs in Readville near Boston. While training, the unit got a lot of support from abolitionists in Massachusetts, including Ralph Waldo Emerson. Supporters also donated things like warm clothing items, battle flags, and $500 for a regimental band to be set up and trained.

Soon, more people were volunteering for the 54th than the regiment needed. Because of this, the medical exam that volunteers needed to pass to get into the 54th was very thorough. This meant that those who were accepted into the 54th were very strong and healthy. The Surgeon General of Massachusetts said about the 54th: "a more robust, strong and healthy set of men were never mustered into the service of the United States."

Even so, the 54th left Boston with high morale (they felt good about serving in the 54th). After finishing their training, the regiment officially began serving in the United States military on May 13, 1863. They left Boston on May 28, with many supporters cheering them on. When they arrived in Beaufort, South Carolina, local blacks and Northern abolitionists greeted them and celebrated their arrival.

In Beaufort, the 54th joined with the 2nd South Carolina Volunteers, a unit of ex-slaves from South Carolina led by James Montgomery. Montgomery led both units in a raid on the town of Darien, Georgia. The people who lived in the town had run away. Montgomery ordered the soldiers to loot and burn the empty town. Shaw argued against doing this, and made official complaints about his soldiers being ordered to burn and loot.

The 54th fought in its first battle on July 16, on James Island, South Carolina. They were able to stop a Confederate attack. 45 members of the 54th were killed during this fight. 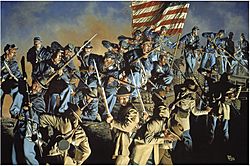 The 54th became famous on July 18, 1863, when it led an attack on Fort Wagner near Charleston, South Carolina. 272 of the 600 men who charged Fort Wagner were "killed, wounded or captured." At this battle, Colonel Shaw was killed, along with 29 of his men. 24 more later died of wounds; 15 were captured; 52 were missing in action and never found; and 149 were hurt. In total, the 54th suffered 272 casualties during this battle. This was the highest number of casualties the 54th would ever see in a single battle during the war.

Union forces were not able to take and hold control of Fort Wagner. However, the 54th was widely celebrated for its courage during the battle. This helped encourage more African-American people to join the Union Army, and encouraged Army commanders to use them in battles. This was a very important step in the Civil War. Later, President Abraham Lincoln said it helped the Union win the Civil War. 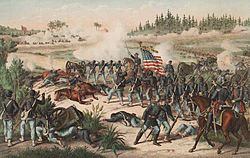 The Battle of Olustee

After Colonel Shaw died, Edward Hallowell became a Colonel and started leading the 54th. Under his command, the 54th fought in the Battle of Olustee. Then they were ordered to march to a train station. A train carrying wounded Union soldiers had broken down, and the wounded soldiers were in danger of being captured. When the 54th arrived, the men attached ropes to the train pulled the train by hand about three miles (4.8 km) to Camp Finnegan. There, they picked up horses to help pull the train. After that, the soldiers and horses pulled the train to Jacksonville, Florida. In all, the 54th pulled the train for a total of ten miles (16 km). This took forty-two hours.

As part of an all-black brigade under Colonel Alfred S. Hartwell, the 54th unsuccessfully attacked entrenched Confederate militia at the November 1864 Battle of Honey Hill. In mid-April 1865, they fought at the Battle of Boykin's Mill, a small fight in South Carolina that was one of the last battles of the war.

All content from Kiddle encyclopedia articles (including the article images and facts) can be freely used under Attribution-ShareAlike license, unless stated otherwise. Cite this article:
54th Massachusetts Infantry Regiment Facts for Kids. Kiddle Encyclopedia.