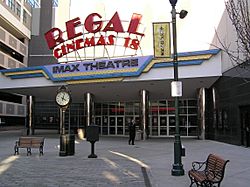 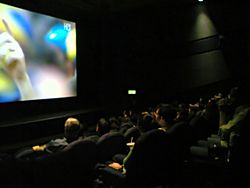 Football fans watching a football game in a movie theater

A movie theater or movie theatre is a place where movies are shown on a big screen. People or "patrons" (the audience) watch movies, usually in chairs inside an auditorium. An electric machine called a projector shines a very bright light through the movie, and people sitting in the dark room see it on the big screen. A movie theatre is sometimes called a cinema. A theatre with multiple screens commonly is called a "multi-plex" or "mega-plex" (if more than 10 screens). Movie theatres have comfortable chairs. There are different types of formats of a movie theatre.

The first movie theatre was opened to the public on April 23, 1896, in Koster and Bial's Music Hall on 34th Street in New York City. The oldest movie theatre in the world, which is still in action today is the Kino Pionier (opened 1907) in Szczecin, Poland. Movie theatres make money from not only movie tickets but from concessions which sell food and drinks (popcorn, candy, soft drinks, etc). In recent years with the increase of movie rental costs, theatres have become more and more creative about how they make money. New theatres being built include restaurants, party rooms, conference rooms, arcades and more.

All content from Kiddle encyclopedia articles (including the article images and facts) can be freely used under Attribution-ShareAlike license, unless stated otherwise. Cite this article:
Movie theater Facts for Kids. Kiddle Encyclopedia.