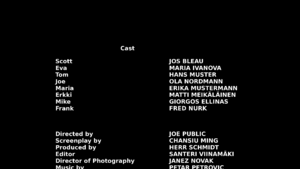 Closing credits or end credits are a list of the cast and crew of a particular motion picture, television program, or video game. Where opening credits appear at the beginning of a work, closing credits appear close to, or at the very end of a work. A full set of credits can include the cast and crew, but also production sponsors, distribution companies, works of music licensed or written for the work, various legal disclaimers, such as copyright and more.

The closing credits are usually typed and appear in white lettering on a solid black background, featuring no sound effects or dialogue, only a musical background, sometimes the works' theme music. Credits are either static and flip from page to page, or scroll as a single list from the bottom of the screen to the top. Occasionally closing credits will divert from this standard form to either scroll in another direction, include illustrations, extra scenes, bloopers, joke credits and post-credits scenes.

The use of closing credits in film to list complete production crew and cast was not firmly established in American film until the 1970's. Before this decade, most movies were released with no closing credits at all.

All content from Kiddle encyclopedia articles (including the article images and facts) can be freely used under Attribution-ShareAlike license, unless stated otherwise. Cite this article:
Closing credits Facts for Kids. Kiddle Encyclopedia.