Popcorn is a snack food made by heating certain kinds of corn. There is a small amount of water inside the seeds, which causes them to explode. When the seed shell breaks a sharp noise is made. The name "pop" is because of this noise. After it pops it is white and fluffy.

Salt and melted butter is often added to popcorn. Sometimes caramel and other flavours are melted and mixed into the popcorn.

Popcorn is a popular food to eat at the cinema.

Corn was first domesticated about 10,000 years ago in what is now Mexico. Archaeologists discovered that people have known about popcorn for thousands of years. In Mexico, for example, remnants of popcorn have been found that date to around 3600 BC.

Popping of the kernels was achieved by hand on the stove-top through the 19th century. Kernels were sold on the East Coast of the United States under names such as Pearls or Nonpareil. The term popped corn first appeared in John Russell Bartlett's 1848 Dictionary of Americanisms. Popcorn is an ingredient in Cracker Jack, and in the early years of the product, it was popped by hand. 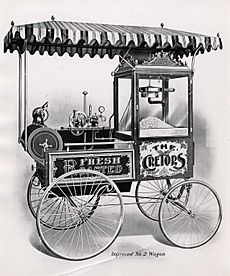 An early popcorn machine in a street cart, invented in the 1880s by Charles Cretors in Chicago.

Popcorn's accessibility increased rapidly in the 1890s with Charles Cretors' invention of the popcorn maker. Cretors, a Chicago candy store owner, created a number of steam-powered machines for roasting nuts and applied the technology to the corn kernels. By the turn of the century, Cretors had created and deployed street carts equipped with steam-powered popcorn makers.

During the Great Depression, popcorn was fairly inexpensive at 5–10 cents a bag and became popular. Thus, while other businesses failed, the popcorn business thrived and became a source of income for many struggling farmers, including the Redenbacher family, namesake of the famous popcorn brand. During World War II, sugar rations diminished candy production, and Americans compensated by eating three times as much popcorn as they had before. The snack was popular at theaters, much to the initial displeasure of many of the theater owners, who thought it distracted from the films. Their minds eventually changed, however, and in 1938 a Midwestern theater owner named Glen W. Dickson installed popcorn machines in the lobbies of his theaters. The venture was a financial success, and the trend soon spread. 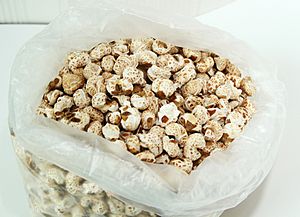 In 1970, Orville Redenbacher's namesake brand of popcorn was launched. In 1981, General Mills received the first patent for a microwave popcorn bag, with popcorn consumption seeing a sharp increase by tens of thousands of pounds in the years following.

At least six localities (all in the Midwestern United States) claim to be the "Popcorn Capital of the World;": Ridgway, Illinois; Valparaiso, Indiana; Van Buren, Indiana; Schaller, Iowa; Marion, Ohio; and North Loup, Nebraska. According to the USDA, corn used for popcorn production is specifically planted for this purpose; most is grown in Nebraska and Indiana, with increasing area in Texas. As the result of an elementary school project, popcorn became the official state snack food of Illinois.

The sequence of a kernel popping

Each kernel of popcorn contains a certain amount of moisture and oil. Unlike most other grains, the outer hull of the popcorn kernel is both strong and impervious to moisture and the starch inside consists almost entirely of a hard type.

As the oil and the water within the kernel are heated, they turn the moisture in the kernel into pressurized steam. Under these conditions, the starch inside the kernel gelatinizes, softens, and becomes pliable. The internal pressure of the entrapped steam continues to increase until the breaking point of the hull is reached: a pressure of approximately 135 psi (930 kPa) and a temperature of 180 °C (356 °F). The hull thereupon ruptures rapidly and explodes, causing a sudden drop in pressure inside the kernel and a corresponding rapid expansion of the steam, which expands the starch and proteins of the endosperm into airy foam. As the foam rapidly cools, the starch and protein polymers set into the familiar crispy puff. Special varieties are grown to give improved popping yield. Though the kernels of some wild types will pop, the cultivated strain is Zea mays everta, which is a special kind of flint corn. 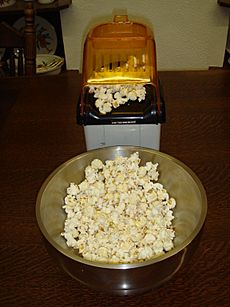 Popcorn can be cooked with butter or oil. Although small quantities can be popped in a stove-top kettle or pot in a home kitchen, commercial sale of freshly popped popcorn employs specially designed popcorn machines, which were invented in Chicago, Illinois, by Charles Cretors in 1885. Cretors successfully introduced his invention at the Columbian Exposition in 1893. At this same world's fair, F.W. Rueckheim introduced a molasses-flavored "Candied Popcorn", the first caramel corn; his brother, Louis Ruekheim, slightly altered the recipe and introduced it as Cracker Jack popcorn in 1896.

Cretors's invention introduced the first patented steam-driven popcorn machine that popped corn in oil. Previously, vendors popped corn by holding a wire basket over an open flame. At best, the result was a hot, dry, unevenly cooked snack. Cretors's machine popped corn in a mixture of one-third clarified butter, two-thirds lard, and salt. This mixture can withstand the 450 °F (232 °C) temperature needed to pop corn and it produces little smoke. A fire under a boiler created steam that drove a small engine; that engine drove the gears, shaft, and agitator that stirred the corn and powered a small automated clown puppet-like figure, "the Toasty Roasty Man", an attention attracting amusement intended to attract business. A wire connected to the top of the cooking pan allowed the operator to disengage the drive mechanism, lift the cover, and dump popped corn into the storage bin beneath. Exhaust from the steam engine was piped to a hollow pan below the corn storage bin and kept freshly popped corn uniformly warm. Excess steam was also used to operate a small, shrill whistle to attract attention.

A different method of popcorn-making involves the "popcorn hammer", a large cast-iron canister that is sealed with a heavy lid and slowly turned over a fire in rotisserie fashion. 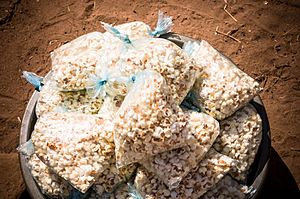 Popcorn grown in Mozambique and sold in the marketplace 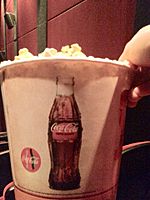 Movie theater popcorn in a bucket in the United States

Popcorn is a popular snack food at sporting events and in movie theaters, where it has been served since the 1930s.

Popcorn smell has an unusually attractive quality for human beings. This is largely because it contains high levels of the chemicals 6-acetyl-2,3,4,5-tetrahydropyridine and 2-acetyl-1-pyrroline, very powerful aroma compounds that are used by food and other industries to make products that either smell like popcorn, bread, or other foods containing the compound in nature, or for other purposes.

Popcorn as a breakfast cereal was consumed by Americans in the 1800s and generally consisted of popcorn with milk and a sweetener.

Popcorn balls (popped kernels stuck together with a sugary "glue") were hugely popular around the turn of the 20th century, but their popularity has since waned. Popcorn balls are still served in some places as a traditional Halloween treat. Cracker Jack is a popular, commercially produced candy that consists of peanuts mixed in with caramel-covered popcorn. Kettle corn is a variation of normal popcorn, cooked with white sugar and salt, traditionally in a large copper kettle. Once reserved for specialty shops and county fairs, kettle corn has recently become popular, especially in the microwave popcorn market. The popcorn maker is a relatively new home appliance, and its popularity is increasing because it offers the opportunity to add flavors of the consumer's own choice and to choose healthy-eating popcorn styles.

All content from Kiddle encyclopedia articles (including the article images and facts) can be freely used under Attribution-ShareAlike license, unless stated otherwise. Cite this article:
Popcorn Facts for Kids. Kiddle Encyclopedia.