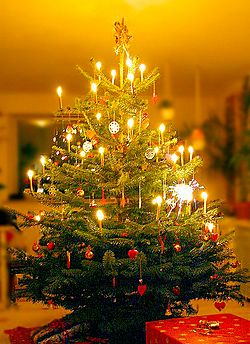 A Christmas tree in a Danish home.

The Christmas tree is a tradition associated with the celebration of Christmas. It is normally an evergreen coniferous tree that is cut in the wild and brought into the home. It is decorated with Christmas lights and colourful ornaments during the days around Christmas. An angel or a star is often placed at the top of the tree. Fir trees outside the home may be decorated in a similar fashion.

Origin of the modern Christmas tree

Modern Christmas trees originated during the Renaissance in early modern Germany. Its 16th-century origins are sometimes associated with Protestant Christian reformer Martin Luther, who is said to have first added lighted candles to an evergreen tree.

The earliest known firmly dated representation of a Christmas tree is on the keystone sculpture of a private home in Turckheim, Alsace (then part of Germany, today France), with the date 1576.

Both natural and artificial trees are used as Christmas trees.

Some trees are sold live with roots and soil, often from a nursery, to be planted later outdoors and enjoyed (and often decorated) for years or decades.

Artificial trees have become increasingly popular, as they are considered more convenient and (if used for several years) less expensive than real trees. Trees come in a number of colors and "species", and some come pre-decorated with lights. At the end of the Christmas season artificial trees can be disassembled and stored compactly.

The first artificial trees that were not green were the metallic trees, introduced about 1958, and quite popular through the 1960s.

Other artificial trees may look nothing like a conifer except for the triangular or conical shape. These may be made from cardboard, glass, plastic, or from stacked items such as ornaments. Such items are often used as tabletop decorations.

All content from Kiddle encyclopedia articles (including the article images and facts) can be freely used under Attribution-ShareAlike license, unless stated otherwise. Cite this article:
Christmas tree Facts for Kids. Kiddle Encyclopedia.