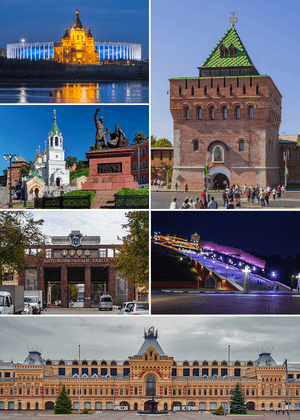 Nizhny Novgorod (Russian:Ни́жний Но́вгород, often shortened to Nizhny) is the fourth largest city in Russia. The first three are Moscow, St. Petersburg, and Novosibirsk. Nizhny Novgorod had a population of 1,311,252 in 2002, and one of 1,438,133 in 1989. It is the economic and cultural center of the vast Volga-Vyatka economic region, and also the administrative center of Nizhny Novgorod Oblast and Volga Federal District.

Originally the name was just Novgorod ("Newtown"), but to distinguish it from the other, older and well-known Novgorod to the west, the city was commonly called "Novgorod of the Lower lands". This land was named "lower" because it is situated downstream, especially from the point of view of other Russian cities such as Moscow, Vladimir and Murom. Later it was transformed into the contemporary name of the city that literally means "Lower Newtown".

The city traces its origin from a small Russian wooden hillfort that was founded by Grand Duke Yuri II in 1221 at the confluence of two of the most important rivers in his principality, the Volga and Oka rivers. Its independent existence was threatened by the continuous Mordvin attacks against it; the major attempt made by forces under Purgaz in April 1229 was repulsed, but after the death of Yuri II on March 4, 1238 at the Battle of the Sit River, the Mongols occupied the fortress. Later a major stronghold for border protection, Nizhny Novgorod fortress took advantage of a natural moat formed by the two rivers.

Along with Moscow and Tver, Nizhny Novgorod was among several newly founded towns that escaped Mongol devastation on account of their insignificance, but grew into (great) centers in vassalic Russian political life during the period of the Tatar Yoke. With the agreement of the Mongol Khan, Nizhny Novgorod was incorporated into the Vladimir-Suzdal Principality in 1264. After 86 years its importance further increased when the seat of the powerful Suzdal Principality was moved here from Gorodets in 1350. Grand Duke Dmitry Konstantinovich (1323–1383) sought to make his capital a rival worthy of Moscow; he built a stone citadel and several churches and was a patron of historians. The earliest extant manuscript of the Russian Primary Chronicle, the Laurentian Codex, was written for him by the local monk Laurentius in 1377.

Strongest fortress of the Grand Duchy of Moscow

After the city's incorporation into the Grand Duchy of Moscow in 1392, the local princes took the name Shuisky and settled in Moscow, where they were prominent at the court and briefly ascended the throne in the person of Vasily IV. After being burnt by the powerful Crimean Tatar chief Edigu in 1408, Nizhny Novgorod was restored and regarded by the Muscovites primarily as a great stronghold in their wars against the Tatars of Kazan. The enormous red-brick kremlin, one of the strongest and earliest preserved citadels in Russia, was built in 1508–1511 under the supervision of Peter the Italian. The fortress was strong enough to withstand Tatar sieges in 1520 and 1536. 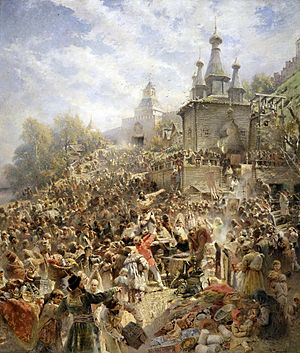 Kuzma Minin appeals to the people of Nizhny Novgorod to raise a volunteer army against the Poles (painting by Konstantin Makovsky, 1896).

In 1612, the so-called "national militia", gathered by a local merchant, Kuzma Minin, and commanded by Knyaz Dmitry Pozharsky expelled the Polish troops from Moscow, thus putting an end to the "Time of Troubles" and establishing the rule of the Romanov dynasty. The main square in front of the Kremlin is named after Minin and Pozharsky, although it is locally known simply as Minin Square. Minin's remains are buried in the citadel. (In commemoration of these events, on October 21, 2005, an exact copy of the Red Square statue of Minin and Pozharsky was placed in front of St John the Baptist Church, which is believed to be the place from where the call to the people had been proclaimed.)

In the course of the following century, the city prospered commercially and was chosen by the Stroganovs (the wealthiest merchant family of Russia) as a base for their operations. A particular style of architecture and icon painting, known as the Stroganov style, developed there at the turn of the 17th and 18th centuries.

The historical coat of arms of Nizhny Novgorod in 1781 was a red deer with black horns and hooves on a white field. The modern coat of arms from 2006 is the same, with a ribbon of order of Lenin and gold crown from above. 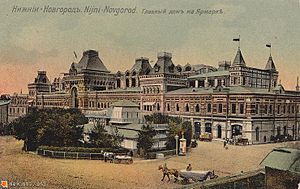 In 1817, the Makaryev Fair, one of the liveliest in the world, was transferred to Nizhny Novgorod, and started to attract millions of visitors annually. By the mid-19th century, the city was firmly established as the trade capital of the Russian Empire. The world's first radio receiver by engineer Alexander Popov and the world's first hyperboloid tower and lattice shell-coverings by engineer Vladimir Shukhov were demonstrated at the All-Russia industrial and art exhibition in Nizhny Novgorod in 1896. According to official Imperial Russian statistics the population of Nizhny Novgorod as of 14 January 1913 was 97,000.

The largest industrial enterprise was the Sormovo Iron Works which was connected by the company's own railway to Moscow station in the Lower Area of Nizhny Novgorod. The private Moscow to Kazan Railway Company's station was in the Upper Area of the city. Other industries gradually developed, and by the start of the 20th century the city was also a first-rank industrial hub. Henry Ford helped build a large truck and tractor plant (GAZ) in the late 1920s, sending engineers and mechanics, including future labour leader Walter Reuther. 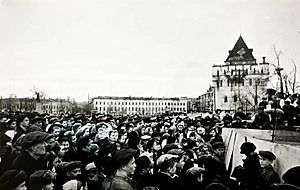 Victory Day on the Minin and Pozharsky Square, 9 May 1945

There were no permanent bridges over the Volga or Oka before the October Revolution in 1917. Temporary bridges were built during the trade fair. The first bridge over the Volga was started by the Moscow–Kazan Railway Company in 1914, but only finished in the Soviet Era when the railway to Kotelnich was opened for service in 1927.

Maxim Gorky was born in Nizhny Novgorod in 1868 as Alexey Maximovich Peshkov. In his novels he described the dismal life of the city proletariat. When he returned to the Soviet Union in 1932 on the invitation of Joseph Stalin, the city was renamed Gorky. The city bore Gorky's name until 1990. His childhood home is preserved as a museum, known as the Kashirin House, after Alexey's grandfather who owned the place.

During the World War II, from 1941 to 1943, Gorky was subjected to air raids and bombardments by Germany. The Germans tried to destroy the city industry because it was the main supplier of military equipment to the front. These attacks became the most powerful in the entire World War II in the rear of the Soviet Union.

During much of the Soviet era, the city was closed to foreigners to safeguard the security of Soviet military research and production facilities, even though it was a popular stopping point for Soviet tourists traveling up and down the Volga in tourist boats. Unusually for a Soviet city of that size, even street maps were not available for sale until the mid-1970s. In 1970, by the Decree of the Presidium of the Supreme Soviet of the USSR, the city was awarded the Order of Lenin. Mátyás Rákosi, communist leader of Hungary, died there in 1971. November 20, 1985 in the city was launched the first section of the metro. The physicist and Nobel laureate Andrei Sakharov was exiled there during 1980–1986 to limit his contacts with foreigners. An end to the "closed" status of the city accompanied the reinstatement of the city's original name in 1990.

Much of the city downtown is built in the Russian Revival and Stalin Empire styles. The dominating feature of the city skyline is the grand Kremlin (1500–1511), with its red-brick towers. After Bolshevik devastation, the only ancient edifice left within the Kremlin walls is the tent-like Archangel Cathedral (1624–1631), first built in stone in the 13th century.

There are more than 600 unique historic, architectural, and cultural monuments in the city. There are about 200 municipal and regional art and cultural institutions within Nizhny Novgorod. Among these institutions there are eight theaters, five concert halls, 97 libraries (with branches), 17 movie theaters (including five for children), 25 institutions of children's optional education, eight museums (16 including branches), and seven parks. 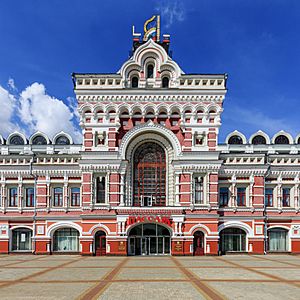 The center of the fair was the main building in the spirit of classicism and the side administrative buildings that formed the central square. To protect from floods, a 3.5 m (11 ft) high dam was built. On November 4, 2017, a new multimedia exhibition called "Russia is My History" was opened in the Main Fair Building. The main focus of the exhibition is the history of Nizhny Novgorod, starting from Finno-Ugric peoples. On the territory of the complex there are departments in which they tell about the foundation of the city, the struggle for independence in the Time of Troubles and the bombing of the city during the World War II. On the first day of work, the entrance to the exhibition was free, because of which a long line lined up in front of the Main Fair Building. 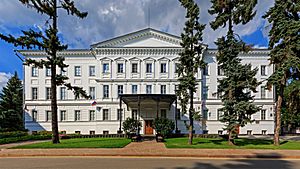 The art gallery in Nizhny Novgorod is a large and important art gallery and museums of human history and culture.

Finally what makes this gallery extremely important is the amazing collection Russian avant-garde with works by Kazimir Malevich, Wassily Kandinsky, Natalia Goncharova, Mikhail Larionov and so on. There is also collection of East Asian art. 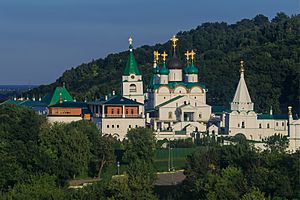 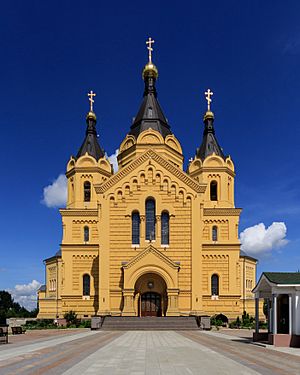 Other notable landmarks are the two great medieval abbeys. The Pechersky Ascension Monastery features the austere five-domed cathedral (1632) and two rare churches surmounted by tent roofs, dating from the 1640s. The Annunciation monastery, likewise surrounded by strong walls, has another five-domed cathedral (1649) and the Assumption church (1678). The only private house preserved from that epoch formerly belonged to the merchant Pushnikov.

There can be little doubt that the most original and delightful churches in the city were built by the Stroganovs in the nascent Baroque style. Of these, the Virgin's Nativity Church (1719) graces one of the central streets, whereas the Church of Our Lady of Smolensk (1694–97) survives in the former village of Gordeyevka (now, part of the city's Kanavinsky District), where the Stroganov palace once stood.

Other notable churches include:

There is also a mosque in Sennaya Square, where the Muslim populations of the city go for Friday prayers, Islamic activities and activities which are organized by the mosque. There is also a small shop to buy halal meats. Most of the Muslims in this city are Tatars.

The centrally located Nizhny Novgorod Synagogue was built in 1881–1883; disused during the Soviet era, it was renovated and reopened circa 1991.

The Chkalov Staircase connecting Minin and Pozharsky Square, the Upper Volga and the Lower Volga embankments. It was built by the architects Alexander Yakovlev, Lev Rudnev and Vladimir Munts. The staircase itself was constructed in the late 1940s by German prisoners of war forced to labor around Gorky. It is the longest staircase in Russia. The staircase starts from the monument to Chkalov, near St. George's Tower of the Kremlin. It is built in the form of a figure of eight and consists of 560 steps, if you count it both sides. The number of steps from the bottom to the top is 442 on the right. In the intersections of the side slopes there are two observation platforms. At the bottom of the stairs is a monument to the boat "Hero", which is located at the Lower Volga embankment.

Standing on a spit of the Volga and Oka Rivers in the city center is the international-class Nizhny Novgorod Stadium. This arena will host six games of the 2018 FIFA World Cup. After the World Cup, the stadium will serve as a multipurpose sports complex.

A singular monument of industrial architecture is a 128 m (420 ft) open-work hyperboloid tower built on the bank of the Oka near Dzerzhinsk as part of a powerline river crossing by the eminent engineer and scientist Vladimir Shukhov in 1929.

View as seen to Rozhdestvenskaya st., Nizhny Novgorod Kremlin, Church of St John the Baptist and the Spit

All content from Kiddle encyclopedia articles (including the article images and facts) can be freely used under Attribution-ShareAlike license, unless stated otherwise. Cite this article:
Nizhny Novgorod Facts for Kids. Kiddle Encyclopedia.