The Kontinental Hockey League (KHL) is an international professional ice hockey league founded in 2008. It comprises 24 member clubs based in Belarus, China, Finland, Latvia, Kazakhstan and Russia, and it is planned to expand to more countries. 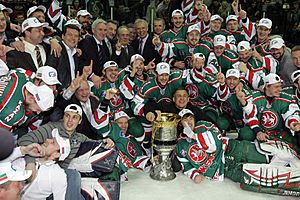 Ak Bars Kazan after winning the Gagarin Cup in 2009

The Gagarin Cup is awarded annually to the league playoff champion at the end of each season. The title of Champion of Russia is given to the highest ranked Russian team.

Though now not as restrictive in maintaining an exclusively Russian composition of players and teams, Russian teams are still not allowed to sign more than five foreign players, while non-Russian teams must have at least five players from their respective country. Foreign goaltenders on Russian teams have a limit regarding total seasonal ice time.

All content from Kiddle encyclopedia articles (including the article images and facts) can be freely used under Attribution-ShareAlike license, unless stated otherwise. Cite this article:
Kontinental Hockey League Facts for Kids. Kiddle Encyclopedia.