Kazan is the capital and largest city of the Republic of Tatarstan, Russia. With a population of 1,243,500, it is the sixth most populous city in Russia. Kazan is one of the largest religious, economic, political, scientific, educational, cultural and sports centers in Russia.

Kazan lies at the confluence of the Volga and Kazanka Rivers in European Russia, about 715 kilometres (444 mi) east from Moscow. The Kazan Kremlin is a World Heritage Site. The millennium of Kazan was celebrated in 2005.

In April 2009, the Russian Patent Office granted Kazan the right to brand itself as the "Third Capital" of Russia. In 2009 it was chosen as the "sports capital of Russia" and it still is referred to as such. In 2011, the European Weightlifting Championships were held here. The city hosted the 2013 Summer Universiade, 2014 World Fencing Championships, the 2015 World Aquatics Championships, and is one of the host cities for the 2017 FIFA Confederations Cup and, for the first time in Russia, the official stage of the Red Bull Air Race World Championship under the auspices of the Fédération Aéronautique Internationale (FAI). Kazan has also held the World Wushu Championships. In 2018, Kazan became one of the cities where the 2018 FIFA World Cup was held. 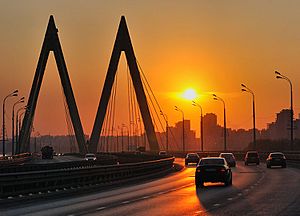 The origin of the name Kazan is uncertain. The most accepted legends derive it from the Bulgar word qazan, which means 'boiler' or 'cauldron'. One legend claims that the city was named after the river Kazanka, which was named after the son of a Bulgar governor dropped a copper cauldron into it. Other local legends claim that the city was named for the resemblance of the hill on which it sits to an upturned cauldron.

Qazan/Kazan was a choice name for the male Turkic/Mongol royalty, most notably that of the Ilkhanid Mongol king, Qazan Khan. It is likely that the city was named after a Mongol/Turkic khan by that name when the city was founded or soon after. 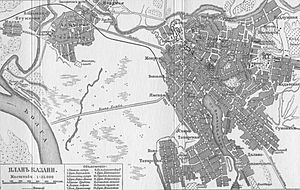 According to the official version adopted today, the city was founded more than 1000 years ago. The estimated date of the urban settlement on the site of Kazan is 1004–1005 years. The reason for this dating is found during excavations of the Kazan Kremlin Czech coin, dated by the Board of St. Wenceslaus (presumably, coinage 929–930 years) and the earliest Czech coin, the remains of masonry and wooden city fence, handicrafts and utensils (Hungarian type lining, women's beads, etc.), as well as other artifacts with less obvious dating. According to official statements, experts from 20 cities of Russia and 22 countries of the world were involved in the study of findings related to the age of Kazan. 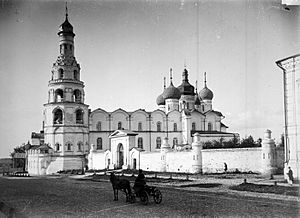 As a result of the Siege of Kazan in 1552, Tsar Ivan the Terrible conquered the city and massacred the majority of the population. During the following governorship of Alexander Gorbatyi-Shuisky, most of the Kazan's Tatar residents were forcibly Christianized or deported, the Kerashen Tatars. Mosques and palaces were ruined.

The surviving Tatar population was moved to a place 50 kilometers (31 mi) away from the city and this place was forcibly settled by Russian farmers and soldiers. Tatars in the Russian service were settled in the Tatar Bistäse settlement near the city's wall. Later Tatar merchants and handicraft masters also settled there. During this period, Kazan was largely destroyed as a result of several great fires. After one of them in 1579, the icon Our Lady of Kazan was discovered in the city. 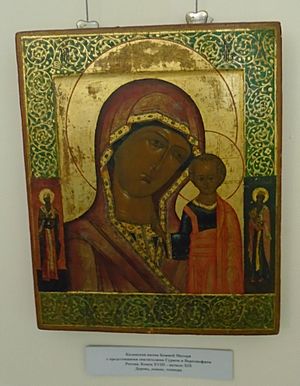 Our Lady of Kazan (National museum of Tatarstan)

In 1708, the Tsardom of Kazan was abolished, and Kazan became the seat of Kazan Governorate. After Peter the Great's visit, the city became a center of shipbuilding for the Caspian fleet.

Kazan was largely destroyed in 1774 as a result of the Pugachev revolt (1774–1776), an uprising by border troops and peasants, but the city, formerly largely of timber construction, was soon afterwards rebuilt, using stone and according to a grid pattern plan, during the reign of Catherine the Great. Catherine also decreed that mosques could again be built in Kazan, the first being Marjani Mosque. 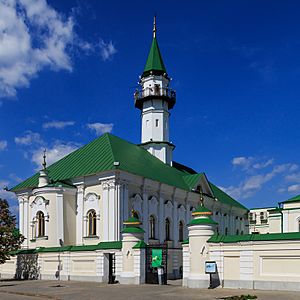 At the beginning of the 19th century Kazan State University and printing press were founded by Alexander I. It became an important center for Oriental Studies in Russia. The Qur'an was first printed in Kazan in 1801.

Kazan became an industrial center and peasants migrated there to join its industrial workforce. In 1875, a horse tramway appeared; 1899 saw the installation of a tramway. After the Russian Revolution of 1905, Tatars were allowed to revive Kazan as a Tatar cultural center. The first Tatar theater and the first Tatar newspaper appeared. 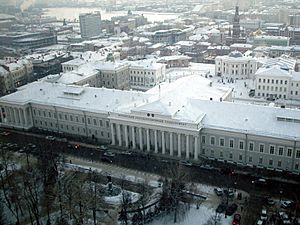 In 1917, Kazan became one of the revolution centers. In the Kazan Operation of August 1918, it was briefly occupied by Czechoslovak Legions. In 1920, Kazan became the center of Tatar Autonomous Soviet Socialist Republic. In the 1920s and 1930s, most of the city's mosques and churches were destroyed, as occurred elsewhere in the USSR. After the Treaty of Rapallo (1922) until 1933, the German and the Russian army operated together the Kama tank school in Kazan. 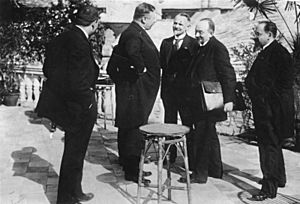 During World War II, many industrial plants and factories to the west were relocated in Kazan, making the city a center of the military industry, producing tanks and planes. After the war Kazan consolidated as an industrial and scientific center. In 1979, the city's population reached one million.

In the late 1980s and in the 1990s, after the dissolution of the Soviet Union, Kazan again became the center of Tatar culture and identity, and separatist tendencies intensified. With the return of capitalism, Kazan became one of the most important centers of the Russian Federation. The city went from 10th to 8th position in population ranking of Russian cities. 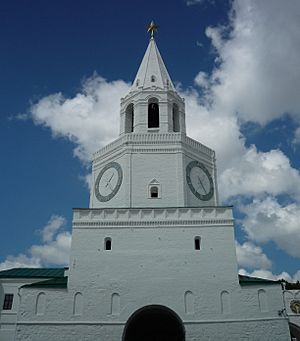 The Spasskaya Tower of the Kazan Kremlin.

The city has a citadel, which was declared a World Heritage Site in 2000. Major monuments in the Kremlin are the five-domed, six-columned Annunciation Cathedral and the mysterious, formerly leaning Söyembikä Tower, named after the last queen of Kazan and regarded as the city's most notable landmark.

Also of interest are the towers and walls, erected in the 16th and 17th centuries but later reconstructed; the Qol-Şarif Mosque, remains of the Saviour Monastery (a 16th-century cathedral demolished by the Bolsheviks) with the Spasskaya Tower; and the Governor's House (1843–53), now the Palace of the President of Tatarstan. The ornate baroque St-Peter-and-Paul's Cathedral on Qawi Nacmi Street and Marcani Mosque on Qayum Nasiri Street date back to the 18th century. 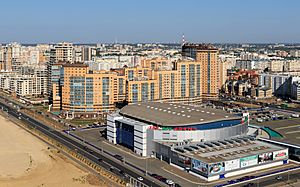 Kazan is actively engaged in international activities. The city has foreign diplomatic, trade and cultural representations, the Kazan Kremlin and the Institute of culture of peace are under the auspices of UNESCO, the city participates in partner movements, is a member of the world organizations of cities. The summit of the CIS heads, the Summit of the world security services and other important forums, conferences and events of the world level were held in Kazan. The head of China, the US Secretary of state, about three dozen presidents and Prime Ministers of foreign States paid visits to the capital of the Republic.

All content from Kiddle encyclopedia articles (including the article images and facts) can be freely used under Attribution-ShareAlike license, unless stated otherwise. Cite this article:
Kazan Facts for Kids. Kiddle Encyclopedia.