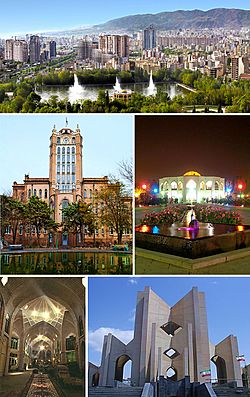 Tabriz is the most populated city in northwestern Iran, one of the historical capitals of Iran and the present capital of East Azerbaijan province. It is the fourth most populous city in Iran. Located in the Quru River valley, in Iran's historic Azerbaijan region, between long ridges of volcanic cones in the Sahand and Eynali mountains, Tabriz's elevation ranges between 1,350 and 1,600 metres (4,430 and 5,250 ft) above sea level. The valley opens up into a plain that gently slopes down to the eastern shores of Lake Urmia, 60 kilometres (37 miles) to the west. With cold winters and temperate summers, Tabriz is considered a summer resort. It was named World Carpet Weaving City by the World Crafts Council in October 2015 and Exemplary Tourist City of 2018 by the Organisation of Islamic Cooperation.

With a population of over 2 million (2016), Tabriz is the largest economic hub and metropolitan area in Northwest Iran. The population is overwhelmingly Azerbaijani, though Persian is spoken by residents as a second language. Tabriz is a major heavy industries hub for automobiles, machine tools, refineries, petrochemicals, textiles and cement production industries. The city is famous for its handicrafts, including hand-woven rugs and jewellery. Local confectionery, chocolate, dried nuts and traditional Tabrizi food are recognised throughout Iran as some of the best. Tabriz is also an academic hub and a site for some of the most prestigious cultural institutes in Northwest Iran.

Tabriz contains many historical monuments, representing Iran's architectural transition throughout its deep history. Most of Tabriz's preserved historical sites belong to Ilkhanid, Safavid and Qajar. Among these sites is the grand Bazaar of Tabriz, which is designated a World Heritage Site. From the early modern era, Tabriz was pivotal in the development, movement and economy of its three neighboring regions; namely the Caucasus, Eastern Anatolia and Central Iran. In modern era city played a vital role in the history of Iran. As the country's closest hub to Europe, many aspects of early modernisation in Iran began in Tabriz. Prior to forced ceding of Iran's Caucasian territories to Imperial Russia, following two Russo-Persian Wars in the first half of the 19th century, Tabriz was at the forefront of Iranian rule over its Caucasian territories. Until 1925, the city was the traditional residence for the crown princes of the Qajar dynasty.

Tabriz is the largest economic center in Northwest Iran. The economy of Tabriz is based on commerce, services, health care and pharmaceutical, small and heavy industries, and handcrafts. Tabriz is the main site for four of Iran's Fortune 100 companies including: ITMCO, Palaz Moket, Kashi Tabriz, Shirin Asal, Aydin.

All content from Kiddle encyclopedia articles (including the article images and facts) can be freely used under Attribution-ShareAlike license, unless stated otherwise. Cite this article:
Tabriz Facts for Kids. Kiddle Encyclopedia.