Nougat ( NOO-gət NOO-gah, or NUG-ət; Azerbaijani: nuga; Persian: ) is a family of confections made with sugar or honey, roasted nuts (almonds, walnuts, pistachios, hazelnuts, and macadamia nuts are common), whipped egg whites, and sometimes chopped candied fruit. The consistency of nougat is chewy, and it is used in a variety of candy bars and chocolates. The word nougat comes from Occitan pan nogat, seemingly from Latin panis nucatus 'nut bread' (the late colloquial Latin adjective nucatum means 'nutted' or 'nutty').

There are three basic kinds of nougat. The first, and most common, is white nougat (mandorlato or torrone in Italy, turrón in Spain), made with beaten egg whites and honey; it appeared in Cologna Veneta, Italy, in the early 15th century, in Alicante, Spain with the first published recipe in the 16th century, and in Montélimar, France, in the 18th century. The second is brown nougat (nougat noir in French, literally "black nougat"), which is made without egg whites and has a firmer, often crunchy texture. The third is the Viennese or German nougat which is essentially a chocolate and nut (usually hazelnut) praline.

Many legends exist around nougat’s origins. The early recipes of white nougat, probably borrowed from Central Asia, were found in a Middle Eastern book in Baghdad the 10th century. That nougat was called ناطف nāṭif. One of these recipes indicates that the nāṭif comes from Harran, a city located between Urfa (now in southeast Turkey) and Aleppo, Syria. Mention of nāṭif was found in a triangle between Urfa, Aleppo, and Baghdad. At the end of the 10th century, the traveler and geographer Ibn Hawqal wrote that he ate some nāṭif in Manbij (in modern Syria) and Bukhara (in modern Uzbekistan).

In southern Europe, nougat is an important component of all Christmas meals. 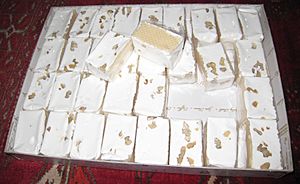 The nougat that appears in many modern candy bars in the United States and United Kingdom is different from traditional recipes, being a mixture of sucrose and corn syrup aerated with a whipping agent such as egg white or hydrolyzed soya protein or gelatine. It may also include vegetable fats and milk powder. This type of nougat is often used as a filler by large candy companies, since it is inexpensive to make. Typically it is combined with nuts, caramel, or chocolate. But some American confections feature such nougat as the primary component, rather than one of several. Varieties of nougat are found in Reese's Fast Break, Snickers, Double Decker, ZERO bars, and Baby Ruth bars. Whipped nougat is the feature ingredient in 3 Musketeers bars.

In Britain, nougat is traditionally made in the style of the southern European varieties, and is commonly found at fairgrounds and seaside resorts. The most common industrially produced type is coloured pink and white, the pink often fruit flavoured, and sometimes wrapped in edible rice paper with almonds and cherries. 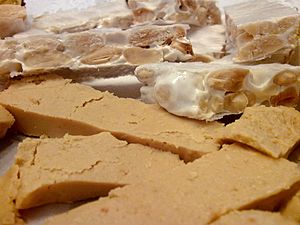 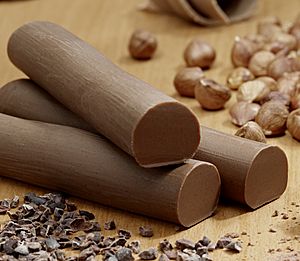 Torrone from Italy includes these same basic ingredients as well as vanilla or citrus flavoring, and is often sandwiched between two very thin sheets of rice paper. The Venetian town of Cologna Veneta is well known for its nougat production, especially the type called mandorlato, always based on honey, sugar, egg whites, and almonds (also known as mandorle in Italian) but with a different taste and harder to bite than torrone.

"Wiener (Viennese) Nougat" is a variant which contains only sugar, cocoa butter, nuts, and cocoa mass, and has a mellow consistency. The nuts used for Viennese nougat are usually hazelnuts. In Germany and the Nordic countries, Viennese nougat is what has traditionally been associated with and labelled as nougat, while in Sweden and Denmark the original nougat is referred to as "French nougat". In Germany, gianduja is traditionally called nougat.

All content from Kiddle encyclopedia articles (including the article images and facts) can be freely used under Attribution-ShareAlike license, unless stated otherwise. Cite this article:
Nougat Facts for Kids. Kiddle Encyclopedia.