Praline is a confection made from nuts and sugar syrup. They may be in whole pieces or a ground powder. The powder is called "pralin". Belgian pralines are different. They have a hard chocolate shell with a softer, sometimes liquid, filling. French pralines are a combination of almonds and caramelized sugar. American pralines have milk or cream. They are therefore softer and creamier, like fudge. 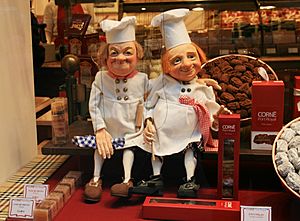 Praline may have originally been inspired in France by the cook of Marshal du Plessis-Praslin (1598–1675), with the word praline deriving from the name Praslin. Early pralines were whole almonds individually coated in caramelized sugar, as opposed to dark nougat, where a sheet of caramelized sugar covers many nuts. Although the New World had been discovered and settled by this time, chocolate-producing cocoa from there was originally not associated with the term. The European chefs used local nuts such as almonds and hazelnuts.

The powder made by grinding up such caramel-coated nuts is called pralin, and is an ingredient in many cakes, pastries, and ice creams. After this powder has been mixed with chocolate, it becomes praliné in French, which gave birth to what is known in French as chocolat praliné. The word praliné is used colloquially in France and Switzerland to refer to these various centres coated with chocolate, known simply as "chocolates" in English. In mainland Europe, the word praline is often used to mean either this nut powder or the chocolate paste made from it, which is widely used to fill chocolates, hence its use in Germany, the Netherlands, Belgium and the United Kingdom to refer to filled chocolates in general. In the United Kingdom, the term can refer either to praline (the filling for chocolates) or, less commonly, to the original whole-nut pralines.

There have always been many types and shapes: nearly always containing a chocolate shell with a softer filling. Confusion can arise over the use of the word praline in Belgium as it may refer to filled chocolates in general known as pralines and it may also refer to a traditional praline filling common in Europe (caramelised hazelnuts (noisettes) or almonds (amandes) ground into a paste, sometimes with whey powder, condensed milk or cream) described as praliné. Belgian chocolates (pralines) are not limited to the traditional praliné filling and often include nuts, marzipan, salted caramel, coffee, a spirit, cream liqueur, cherry or a chocolate blend that contrasts with the outer shell. They are often sold in stylised boxes in the form of a gift box. The largest manufacturers are Neuhaus, Godiva, Leonidas, and Guylian. 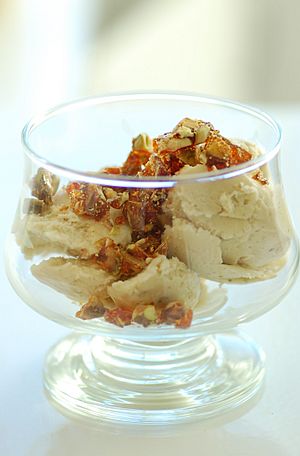 French settlers brought the recipe to Louisiana, where both sugar cane and pecan trees were plentiful. During the 19th century, New Orleans chefs substituted pecans for almonds, added cream to thicken the confection, and thus created what became known throughout the American South as the praline.

Pralines have a creamy consistency, similar to fudge. They are usually made by combining sugar (often brown), butter, cream or buttermilk, and pecans in a pot over medium-high heat, and stirring constantly until most of the water has evaporated and it has reached a thick texture with a brown color. This is then usually dropped by spoonfuls onto wax paper or a sheet of aluminum foil greased with butter, and left to cool.

'Pralines and Cream' is a common ice cream flavor in the United States and Canada. In New Orleans, Acadiana, and Baton Rouge, Louisiana, pralines are sometimes called "pecan candy".

All content from Kiddle encyclopedia articles (including the article images and facts) can be freely used under Attribution-ShareAlike license, unless stated otherwise. Cite this article:
Praline Facts for Kids. Kiddle Encyclopedia.