Fudge is a sometimes cake-like candy that can be rich and can have the flavor of cocoa. It is made by putting sugar, butter, milk, and chocolate and mixing them together. 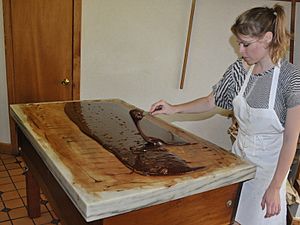 Fudge being cooled and shaped on a marble slab

In forming a fondant, it is not easy to keep all vibrations and seed crystals from causing rapid crystallization into large crystals.

Consequently, milkfat and corn syrup are often added. Corn syrup contains glucose, fructose (monosaccharides), and maltose (disaccharide). These sugars interact with sucrose molecules. They help prevent premature crystallization by inhibiting sucrose crystal contact. The fat also helps inhibit rapid crystallization. Controlling the crystallization of the supersaturated sugar solution is the key to making smooth fudge. Initiation of crystals before the desired time will result in fudge with fewer, larger sugar grains. The final texture would then have a grainy mouthfeel rather than the smooth texture of high-quality fudge.

One of the most important attributes of fudge is its texture. The end-point temperature separates hard caramel from fudge. The higher the peak temperature, the more sugar is dissolved and the more water is evaporated, resulting in a higher sugar-to-water ratio. The heated fudge is sometimes poured onto a marble slab to be cooled and shaped.

Some recipes call for making fudge with prepared marshmallows as the sweetener. This allows the finished confection to use the structure of the marshmallow for support instead of relying on the crystallization of the sucrose.

Hot fudge in the United States and Canada is usually considered to be a chocolate product often used as a topping for ice cream in a heated form, particularly sundaes and parfaits. It may also occasionally be used as a topping for s'mores. It is a thick, chocolate-flavored syrup (flavored with natural or artificial flavorings) similar in flavor and texture to chocolate fudge, except less viscous.

All content from Kiddle encyclopedia articles (including the article images and facts) can be freely used under Attribution-ShareAlike license, unless stated otherwise. Cite this article:
Fudge Facts for Kids. Kiddle Encyclopedia.