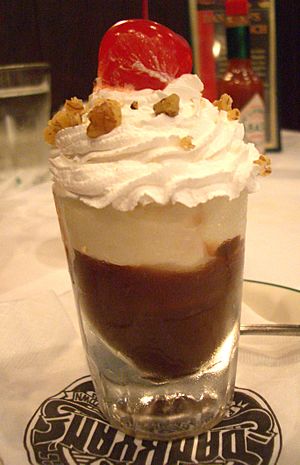 A chocolate sundae in a shot glass

The sundae is an ice cream dessert. It typically consists of a scoop of ice cream topped with sauce or syrup, and in some cases other toppings including chopped nuts, sprinkles, whipped cream, or maraschino cherries. The first historically documented sundae was created on Sunday, April 3, 1892. 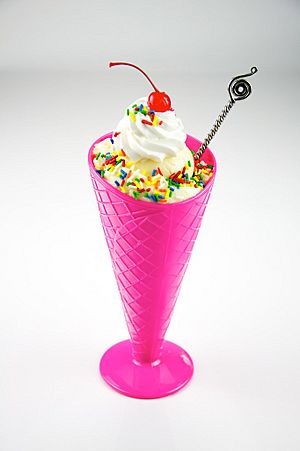 The original sundae consists of vanilla ice cream topped with whipped cream and a maraschino cherry.

The original sundae consists of vanilla ice cream topped with a flavored sauce or syrup, whipped cream, and a maraschino cherry. Classic sundaes are typically named after flavored syrup employed in the recipe: cherry sundae, chocolate sundae, strawberry sundae, raspberry sundae, etc. The classic sundae is traditionally served in a tulip-shaped, footed glass vase. Due to the long association between the shape of the glass and the dessert, this style of serving dish is generally now known as a sundae glass. 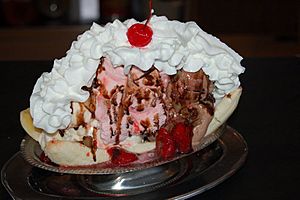 This is a sundae served in a tall glass filled with layers of ice cream or yogurt, gelatine, and flavorings such as syrups, whipped cream, granola, fresh fruit, and/or liqueurs.

This ice cream sundae is served in a large tall glass, consisting of layers of ice cream, jelly, and cream, topped with syrup, nuts, whipped cream, and often a cherry; it is popular in the United Kingdom.

Sliced or chopped fruit that has been sugared and let to sit for an hour or more to form a sweet syrup may be substituted for the flavored sauce or syrup of the classic sundae. Fresh fruit sundaes include named variations such as the strawberry, peach, raspberry, blueberry, blackberry, and mixed fruit sundaes. Fresh fruit sundaes are generally served during the summer months, and they are sometimes advertised as specialty offerings in agricultural areas where particular fruits are grown.

Jarred fruit products are also available which are made specifically for the preparation of ice cream sundaes, often sweetened and in a thickened flavored juice. Sundaes can also be topped with canned fruits.

Heated-sauce sundaes are those in which the flavored sauce or syrup is heated before being poured over the ice cream, creating appealing differences in temperature as well as texture. 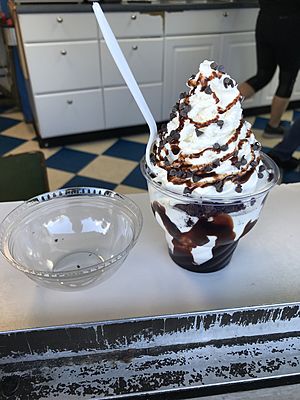 An example of a hot fudge sundae

Hot fudge
The hot fudge sundae is a variation on the classic sundae and is often a creation of vanilla ice cream, sprinkles, hot chocolate sauce (hence the "hot fudge"), whipped cream, nuts, and a single bright-red maraschino cherry on top. The invention of this particular variant has been credited to Clarence Clifton Brown, the owner of C.C. Brown’s Ice Cream Shop in Hollywood, California, in 1906. Clifton made his own fudge in copper kettles that were originally brought to the city by covered wagon, using a secret recipe that the family guarded; the store continued to prepare the fudge in these same barrels until the store's closure in 1996. It is said to have taken him two months to perfect the complete sundae.

Caramel
This is a variation of the hot fudge sundae in which heated caramel sauce replaces the heated chocolate sauce. The other ingredients remain unchanged.

Turtle
The combination of vanilla ice cream, hot fudge and hot caramel sauces, and toasted pecans is known as a turtle sundae. The name derives from the turtle candy, which consists of pecans covered with caramel and then dipped in chocolate. 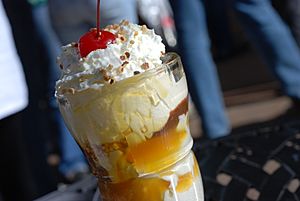 The butterscotch sundae is a variation of the hot fudge sundae.

This is a variation of the hot fudge sundae in which butterscotch sauce replaces the heated chocolate sauce. The other ingredients remain unchanged.

Other heated sauce varieties
Occasionally, other stiff-textured sweet sauces replace the hot chocolate sauce of the classic hot fudge sundae. These novelty sundaes include the peanut butter sundae, the Nutella sundae, the hot maple syrup sundae, and others.

This sundae features a scoop of vanilla ice cream with chocolate sauce and a scoop of chocolate ice cream with creamy white marshmallow sauce, topped with Spanish peanuts. The Tin Roof Sundae was created in 1916, at the Potter Drug Co., in Potter, Nebraska, owned by pharmacist James Earl Thayer. His son, Harold Dean “Pinky” Thayer, worked in the soda fountain as a teenager and is credited for inventing the ice cream treat. According to Dr. J.E. Thayer of Sidney, there are two stories of how the sundae got its name. The first is that it was inspired by the tin ceiling in the business; the other is that the stable across the street had a tin roof and that he named it after that. The Tin Roof Sundae can still be enjoyed in Potter, Nebraska, where the Potter Drug Co., now called the Potter Sundry, is still in operation.

This is a rich sundae made with brownies, vanilla ice cream, chocolate syrup, peanuts, hot fudge, and whipped cream, often topped with a maraschino cherry. If a blondie replaces the brownie, then caramel sauce is used as a topping instead of chocolate sauce.

This sundae consists of vanilla ice cream, crushed strawberry, crushed pineapple, whipped cream, and a cherry. It is named for the protagonist in the 1899 book David Harum; A Story of American Life.

All content from Kiddle encyclopedia articles (including the article images and facts) can be freely used under Attribution-ShareAlike license, unless stated otherwise. Cite this article:
Sundae Facts for Kids. Kiddle Encyclopedia.