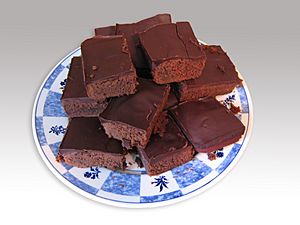 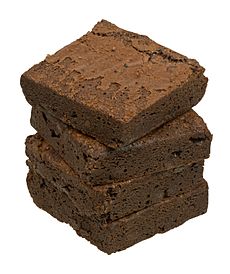 A chocolate brownie is a square baked dessert. It is a cross between a cake and a soft cookie in texture and comes in a variety of forms. They can be made without anything aside from the essential ingredients, but nuts (usually walnuts) and chocolate chips are commonly added to make them more substantial. Another variation made with brown sugar and chocolate bits but without melted chocolate in the batter is called a blonde brownie or blondie. The brownie was developed in the United States at the end of the 19th century and popularized in the U.S. and Canada during the first half of the 20th century.

Brownies are typically eaten by hand, often accompanied by milk, served warm with ice cream (a la mode), topped with whipped cream, or sprinkled with powdered sugar and fudge. In North America they are common lunchbox treats, and also popular in restaurants and coffeehouses.

One legend about the creation of brownies is that of Bertha Palmer, a prominent Chicago socialite whose husband owned the Palmer House Hotel. In 1893 Palmer asked a pastry chef for a dessert suitable for ladies attending the Chicago World's Columbian Exposition. She requested a cake-like confection smaller than a piece of cake that could be included in boxed lunches. The result was the Palmer House Brownie with walnuts and an apricot glaze. The modern Palmer House Hotel serves a dessert to patrons made from the same recipe. The name was given to the dessert sometime after 1893, but was not used by cook books or journals at the time. 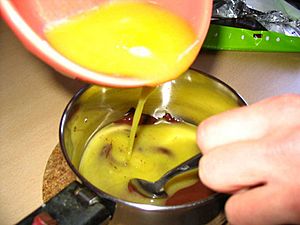 Mixing melted butter with chocolate to make a chocolate brownie 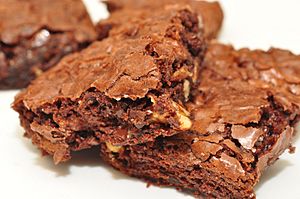 There are different types of brownie. They are either chewy or cake-like depending on the recipe. Sometimes nuts or chocolate chips are added, or icing is put on top. A brownie with brown sugar and no chocolate is called a blondie.

All content from Kiddle encyclopedia articles (including the article images and facts) can be freely used under Attribution-ShareAlike license, unless stated otherwise. Cite this article:
Chocolate brownie Facts for Kids. Kiddle Encyclopedia.