Kids Encyclopedia Facts
This page is about the confectionery. For restaurant buffets, see dessert bar (buffet). For other uses, see Bar (disambiguation).

Dessert bars, or simply bars or squares, are a type of American "bar cookie" that has the texture of a firm cake or softer than usual cookie. They are prepared in a pan and then baked in the oven. They are cut into squares or rectangles. They are staples of bake sales and are often made for birthdays. They are especially popular during the holidays, but many people eat them all year. Many coffee shops and bakeries also offer the treats. Popular flavors include peanut butter bars, lemon bars, chocolate coconut bars, pineapple bars, apple bars, almond bars, toffee bars, chocolate cheesecake bars and the "famous" seven-layer bar. In addition to sugar, eggs, butter, flour and milk, common ingredients are chocolate chips, nuts, raspberry jam, coconut, cocoa powder, graham cracker, pudding, mini-marshmallows and peanut butter. More exotic bars can be made with ingredients including sour cream, rhubarb, pretzels, candies, vanilla, raisins, and pumpkin. The Nanaimo bar is a bar dessert that requires no baking and is named after the city of Nanaimo, British Columbia. 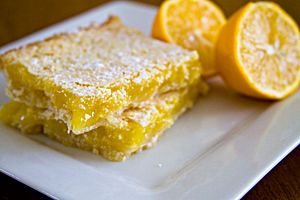 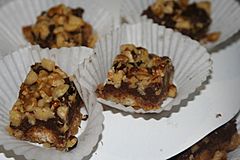 All content from Kiddle encyclopedia articles (including the article images and facts) can be freely used under Attribution-ShareAlike license, unless stated otherwise. Cite this article:
Dessert bar Facts for Kids. Kiddle Encyclopedia.