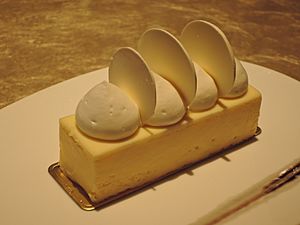 A slice of cheesecake 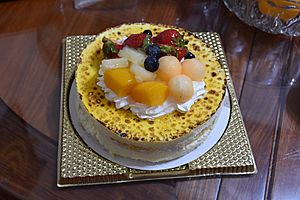 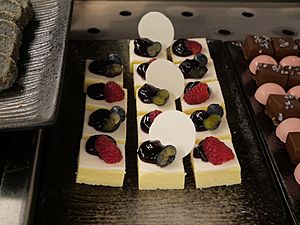 A cheesecake is a dessert cake made of cheese (usually cream cheese but sometimes ricotta), eggs, and sugar. It often has a graham cracker crumb crust, sometimes held together by melted butter. The filling has a very heavy, smooth texture. It sometimes has sour cream to make it easier to shape and may have fruit flavoring such as strawberry, blueberry, or lemon. It is often topped with fresh fruit or chocolate.

Cheesecake is now often thought to be part of American cooking, but it has a long history. Cheese making began around 2000 bc, and scientists who study people in the past have found cheese molds almost as old.

Cheesecakes are known to go back to at least Greece. In the 100s ad, the writer Athenaeus's Dinner-Table Philosophers mentioned the poet Callimachus (around the 200s bc) used to have a book by an "Aegimius" about the art of making cheesecakes (Greek: Πλακουντοπουκόν Σύγγραμμα, Plakountopoukón Sýngramma). Cheesecake may have been given to the sportspeople during the Olympic Games, which started in 776 bc.

Even before the Romans took over Greece, they had begun making cheesecakes as well. M. Porcius Cato's Book on Farming (written around 160 bc) mentions three kinds of cakes—libum, savillum, and placenta—for use as offerings to the gods. Placenta cakes were the closest to today's cheesecakes, since its crust and filling are made separately.

Europeans stopped using yeast and started adding beaten eggs to their cheesecakes around the 1700s. This made it taste more like a dessert than a cheesebread.

Cheesecake recipes were brought to the United States as people moved there from Europe. Most of today's kinds of cheesecake ("New York-style cheesecake") come from the kind created by William Lawrence of Chester, New York, in 1872. He was trying to make something like the soft French Neufchâtel cheese and ended up with a heavy, creamy "unripened cheese".

There is an all-garlic restaurant in Stockholm where they offer a garlic cheesecake.

Sonya Thomas holds the world record for eating the most cheesecakes in a given time. She ate 11 pounds of cheesecake in nine minutes.

All content from Kiddle encyclopedia articles (including the article images and facts) can be freely used under Attribution-ShareAlike license, unless stated otherwise. Cite this article:
Cheesecake Facts for Kids. Kiddle Encyclopedia.