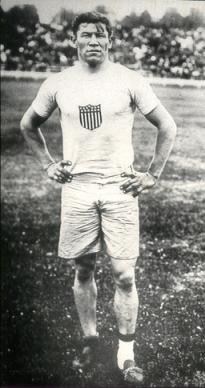 Jim Thorpe at the 1912 Summer Olympics

A sportsperson, also known as sportsman or sportswoman, is a person who is involved in sports. It may mean someone who is known for the promotion of sport or athletic activities.

A sportsperson can be a man or a woman who is person trained to compete or interested in a sport involving physical strength, speed or endurance. A sportsman is a player in a sport; but the term also means someone who plays sport in a way that shows respect and fairness towards the opposing player or team.

The term sportsman can also be used to describe a former competitor who continues to promote the sport in later years. For example, Tsunekazu Takeda is a sportsman who competed in two Summer Olympic Games and who was the President of the Japanese Olympic Committee before he was elected to the International Olympic Committee (IOC) in 2012.

Sportspeople may be professionals or amateurs. Sportsmen and sportswomen often have particularly well-developed physiques obtained by extensive physical training and strict exercise accompanied by a strict dietary regimen, but term is also used more broadly. For example, Yifan Hou was honored in 2011 as the best sportsperson of the year in a non-Olympic event.

The term athlete may be used as a synonym for sportspeople in general, but the word has strong connotations of people who compete in team sports, as contrasted with other sporting types such as horse riding and driving. For example, a fisherman may be called a sportsman, but not an athlete. In British English (as well as other variants in the Commonwealth) athlete can also have a more specific meaning of people who compete in traditional athletics (track and field) events.

The term "World's Greatest Athlete" was first to describe the sportsman Jim Thorpe in the 1912 Summer Olympics at Stockholm in Sweden. Thorpe won the gold medal in the decathlon. When King Gustav V of Sweden awarded Thorpe, he said, "You, sir, are the greatest athlete in the world."

The title of "World's Greatest Athlete" traditionally belongs to the world's top competitor in the decathlon (males) and heptathlon (females) in track and field. These competitions require an sportsman to possess the whole spectrum of athletic ability in order to be successful including speed, strength, coordination, jumping ability, and endurance.

All content from Kiddle encyclopedia articles (including the article images and facts) can be freely used under Attribution-ShareAlike license, unless stated otherwise. Cite this article:
Sportsperson Facts for Kids. Kiddle Encyclopedia.