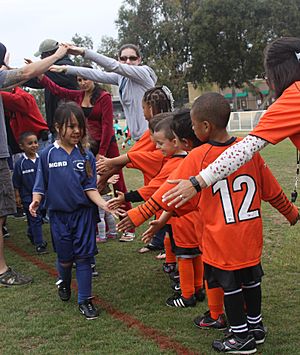 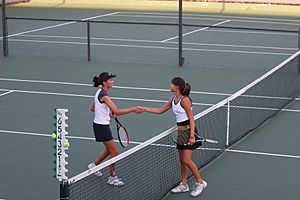 Sportsmanship is traditional value in sports and competition. It means playing clean and handling both victory and defeat with grace, style, and dignity.

Sportsmanship is generally understood to include

The ideal of sportsmanship argues that "it doesn't matter whether you win or lose, but how you play the game".

In the context of the Olympic Games, athletes are expected to do their best. Otherwise, they would go against the Olympic motto of "Faster, Higher, Stronger".

In the London Olympics, some athletes attempted to lose their badminton matches, including

All content from Kiddle encyclopedia articles (including the article images and facts) can be freely used under Attribution-ShareAlike license, unless stated otherwise. Cite this article:
Sportsmanship Facts for Kids. Kiddle Encyclopedia.