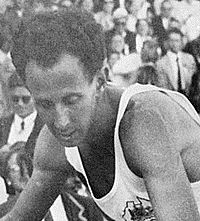 John Michael Landy (born 12 April 1930) is a retired Australian middle-distance runner and politician. Landy was born in Melbourne. He was the second man to break the four-minute mile barrier in the mile run. He held the world records for the 1500 metre run and the mile race. He was also the 26th Governor of Victoria from 2001 to 2006.

All content from Kiddle encyclopedia articles (including the article images and facts) can be freely used under Attribution-ShareAlike license, unless stated otherwise. Cite this article:
John Landy Facts for Kids. Kiddle Encyclopedia.