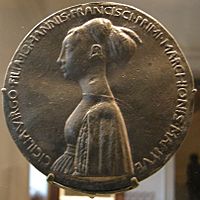 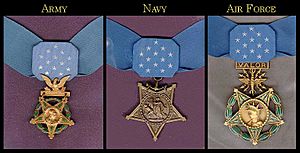 A medal is a small metal object that is given as an award for doing something important or to commemorate something. There are medals for sports, military, academics, etc. There also exist medals that have religious meaning.

Military decorations, service awards, and medals are often confused with one another. Decoration is the term for awards which require acts of heroism or achievement (such as the British Victoria Cross or American Silver Star). A service award or campaign medal is awarded for serving in a place and time (such as the Iraq Campaign Medal). In either case, an award or decoration may be presented as a medal.

All content from Kiddle encyclopedia articles (including the article images and facts) can be freely used under Attribution-ShareAlike license, unless stated otherwise. Cite this article:
Medal Facts for Kids. Kiddle Encyclopedia.