House of Gonzaga facts for kids 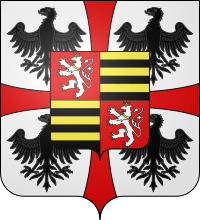 Arms of the Gonzaga rulers of Mantua in Italy, from 1432. Gianfrancesco Gonzaga was raised to the rank of marquis by the Emperor Sigismund.

The House of Gonzaga were a noble family that ruled Mantua in Northern Italy from 1328 to 1708. They also ruled Monferrato in Piedmont, Nevers in France, and also many other lesser fiefs in Italy and Europe. Among their members was a saint, twelve cardinals and fourteen bishops of the Catholic Church.

All content from Kiddle encyclopedia articles (including the article images and facts) can be freely used under Attribution-ShareAlike license, unless stated otherwise. Cite this article:
House of Gonzaga Facts for Kids. Kiddle Encyclopedia.