In this Japanese name, the family name is Takeda. 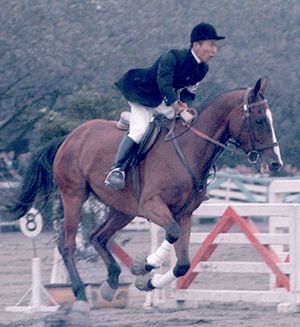 Tsunekazu Takeda (竹田 恆和code: ja is deprecated , Takeda Tsunekazu, born November 1, 1947) is a Japanese athlete. He is best known as an Equestrian who competed in two Summer Olympic Games. He is the current President of the Japanese Olympic Committee.

Takeda was born on November 1, 1947 in Tokyo. He was the third son of Prince Tsuneyoshi Takeda and his great-grandfather was Emperor Meiji.

He graduated from Keio University in 1970 with a degree in law.

In 2001, he became president of the Japanese Olympic Committee. He is also an Executive Board member on the Olympic Council of Asia.

In July 2012, he was elected to be a member of the International Olympic Committee (IOC).

All content from Kiddle encyclopedia articles (including the article images and facts) can be freely used under Attribution-ShareAlike license, unless stated otherwise. Cite this article:
Tsunekazu Takeda Facts for Kids. Kiddle Encyclopedia.