Keio University is a private university located in Minato, Tokyo, Japan. It is known as the oldest institute of modern higher education in Japan. Founder Fukuzawa Yukichi originally established it as a school for Western studies in 1858 in Edo (now Tokyo).

It has eleven campuses in Tokyo and Kanagawa. It has ten faculties: Letters, Economics, Law, Business and Commerce, Medicine, Science and Technology, Policy Management, Environment and Information Studies, Nursing and Medical Care, and Pharmacy. Keio ranks 9th in the world in the Times Higher Education's Alma Mater Index.

The university is one of the Japanese Ministry of Education, Culture, Sports, Science and Technology's thirteen "Global 30" Project universities. In the United States, Keio has a high school called "Keio Academy of New York". 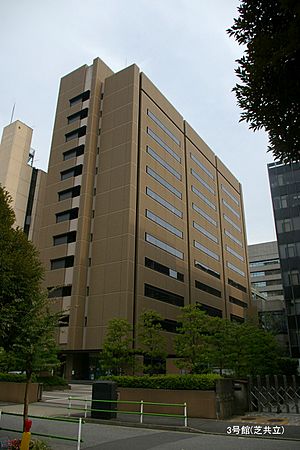 While Keiō's initial identity was that of a private school of Western studies, it expanded and established its first university faculty in 1890, and became known as a leading institute in Japanese higher education. It was the first Japanese university to reach its 150th anniversary, celebrating this anniversary in 2008.

Keio has leading research centers. It has approximately 30 Research Centers located on its five main campuses and at other facilities for advanced research in Japan. Keio University Research Institute at SFC (KRIS) has joined the MIT and the French INRIA in hosting the international W3C.

Keio University Hospital is one of the largest and most well-known general hospitals in Japan and is also a famous teaching hospital. Established in 1920, it has over 1,000 beds, a leading laboratory, and research and medical information divisions.

The only copy held outside Europe or North America is a first volume facsimile of the Gutenberg Bible at Keio University. Purchased by the university in 1996, from Maruzen booksellers who originally purchased the copy at auction in 1987 for US$5.4 million.

All content from Kiddle encyclopedia articles (including the article images and facts) can be freely used under Attribution-ShareAlike license, unless stated otherwise. Cite this article:
Keio University Facts for Kids. Kiddle Encyclopedia.