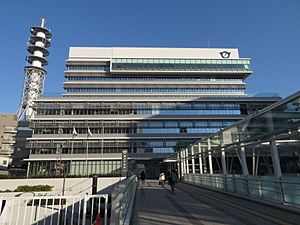 Fujisawa (藤沢市code: ja is deprecated , Fujisawa-shi) is a city in Kanagawa Prefecture, Japan.

Fujisawa is in the central part of Kanagawa Prefecture. It faces Sagami Bay of the Pacific Ocean. The northern part of the city is on the Sagamino plateau while the southern part is on the Shonan Dunes.

Fujisawa has three major topographical features: the island of Enoshima to the south connected to the Katase shoreline area by a road bridge, and two rivers, the Hikiji and the Sakai, which run north-south. The Hikiji can be traced from an area designated as a nature reserve park in the city of Yamato and flows directly along the boundary of the joint US Navy and Japan Maritime Self-Defense Force Atsugi Naval Air Base and the United States Army Camp Zama. The Sakai runs directly from the mountains between Machida and Hachiōji, and for quite some distance forms the border between the Tokyo Metropolitan Area and Kanagawa Prefecture. From Machida city centre, the river can be directly followed by a foot and cycle path to Fujisawa city centre, a distance of approximately 35 km (22 mi). Another cycle path runs along the Shonan Coastal path, from the Sagami River, in Hiratsuka, to Enoshima Bridge in Fujisawa. 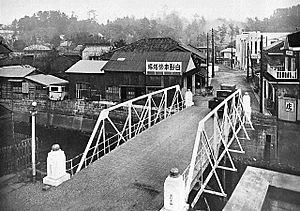 The area around present-day Fujisawa City has been inhabited for thousands of years. Archaeologists have found stone tools and shell middens from the Japanese Paleolithic period, ceramic shards from the Jōmon period, and graves from the Kofun period at numerous locations. The area is mentioned in the Nara period Nihon Shoki chronicles. By the Heian period, central Sagami Province was divided into shōen controlled by the Muroaoka, Oe, and other local warlords. During the Kamakura period, Fujisawa was the setting for a number of battles to overthrow the Kamakura shogunate as mentioned in the late 14th century Taiheiki. During the Muromachi period, Fujisawa developed around Yugyo-ji, a Buddhist temple, which was established in 1325.

With the Edo period, Fujisawa prospered as Fujisawa-shuku, a post station on the Tōkaidō highway connecting Edo with Kyoto. Shōgun Tokugawa Ieyasu built a palace in Fujisawa as a rest stop between Edo and Sunpu.

Following the Meiji Restoration, the area was divided into villages in Kōza District and Kamakura District within Kanagawa Prefecture. The Kōza District office was located in Fujisawa from 1878. The area developed rapidly after the opening of Fujisawa Station of Tōkaidō Main Line in 1887.

During the cadastral reform of April 1, 1889, Fujisawa-Ōsaka Town (in Kōza District) and Fujisawa-Ōtomi Town (in Kamakura District) were created through the merger of local hamlets. Emperor Meiji visited Fujisawa in 1891 to watch military maneuvers. The IJA 49th Infantry Regiment under the IJA 1st Division was stationed in Fujisawa from 1907. During the same year, Fujisawa-Ōsaka Town absorbed Fujisawa-Ōtomi Town and expanded further in 1908 by annexing the neighboring villages of Kugenuma and Meiji (both from Kamakura District), renaming itself Fujisawa Town.

The 1923 Great Kantō earthquake caused severe damage to Fujisawa, with some 4,000 houses destroyed. An Imperial Japanese Navy Artillery School was established in Tsujido in 1926.

The town of Fujisawa was elevated to city status on October 1, 1940. Fujisawa expanded by annexing the village of Muraoka in 1941, the village of Mutsuai in 1942, the town of Katase in 1947, and the villages of Goshomi, Chogo, Takakura and parts of Koide (hamlet of Endo) in 1955. Fujisawa hosted the yachting events of the 1964 Summer Olympics.

These improved transport links, such as the Yokohama Subway line and express train services on the Odakyu line, have made Fujisawa an increasingly attractive and cost-effective commuter suburb for Tokyo and Yokohama.

Fujisawa has a mixed economy with a strong industrial base. Isuzu retains a large truck factory at Tsuchidana. Kobe Steel has a factory in the east of the city, as does NSK Microprecision, a maker of bearings and precision parts. Sony operates the Shonan Technology Center in Fujisawa. Ebara Corporation, a major manufacturer of pumps and water treatment equipment has a plant in Fujisawa.

Fujisawa has extensive commercial shopping facilities and has the largest commercial city centre on the Shonan coast. Fujisawa is also a bedroom community for Yokohama and Tokyo. 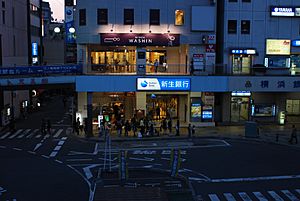 Fujisawa has the usual range of city and prefectural schools, including Shonan High School, one of the leading high schools in Kanagawa with former Tokyo Governor Shintaro Ishihara as a graduate. There are a number of similar private institutions.

There are four university campuses in Fujisawa: prestigious Keio University's Shonan Fujisawa Campus (SFC) with three faculties and a graduate school in Endo, Nihon University's School of Natural Science at Mutsuai, and Tama University's Global Studies Faculty near Shonandai, all in the northern part of the city, and the Shonan Institute of Technology (SIT) in Tsujido Nishikaigan to the south.

Fujisawa remains at the centre of the 'Shōnan lifestyle' image, and its good rail and adequate road connections make it a very popular destination for day trippers from the Kanto region. Surfing and beach volleyball tournaments in summertime attract visitors, especially younger people, and they are also drawn to the seasonal bars and rest houses that are erected along the beach from Kugenuma Kaigan to Enoshima Kaigan.

Fujisawa has two major firework displays in the summer, in late July and early August, usually sandwiched in between similar festivals in Chigasaki, Hiratsuka, Kamakura, and Yokohama.

Enoshima Island has many attractions, including a botanical gardens and Enoshima Lighthouse which is open to visitors. Its height of 119.6 meters above sea level affords an excellent view of the area and, on a clear day, Mount Fuji. There are a number of famous Shinto shrines, some in caves on the south side of the island.

One of Fujisawa's most popular seasonal products is shirasu, similar to but much smaller and softer than whitebait.

All content from Kiddle encyclopedia articles (including the article images and facts) can be freely used under Attribution-ShareAlike license, unless stated otherwise. Cite this article:
Fujisawa, Kanagawa Facts for Kids. Kiddle Encyclopedia.