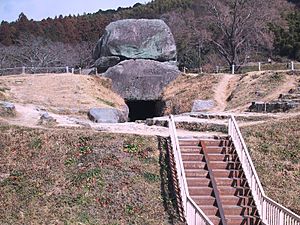 The Ishibutai Kofun in Asuka. This is the largest crypt in Japan, with the largest stone having a weight of 75 tons

The Kofun period is an era in the history of Japan from about 300 to 538 AD, following the Yayoi period. The Kofun and the subsequent Asuka periods are sometimes collectively called the Yamato period. This period is the earliest era of recorded history in Japan.

It was a period of cultural import. Continuing from the Yayoi period, the Kofun period had a strong influence from the Korean Peninsula; archaeologists consider it a shared culture across the southern Korean Peninsula.

The Kofun period recorded Japan's earliest political centralization, when the Yamato clan rose to power in southwestern Japan, established the Imperial House, and helped control trade routes across the region. 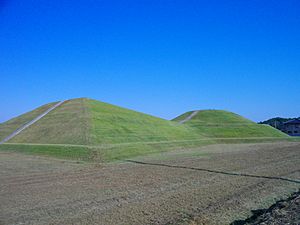 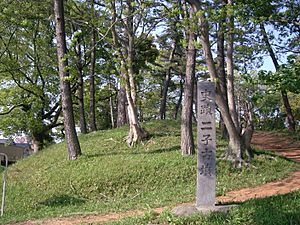 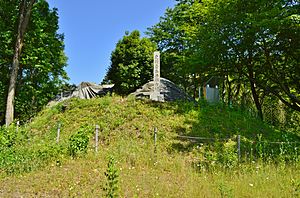 The word kofun is Japanese for the type of burial mound dating from this era, and archaeology indicates that the mound tombs and material culture of the elite were similar throughout the region. From China, Buddhism and the Chinese writing system were introduced near the end of the period.

Kofun from Middle Chinese meaning "burial mound", are burial mounds built for members of the ruling class from the 3rd to the 7th centuries in Japan, and the Kofun period takes its name from the distinctive earthen mounds. The mounds contained large stone burial chambers, and some are surrounded by moats.

Kofun come in many shapes, with round and square the most common. A distinct style is keyhole-shaped, with a square front and round back. Kofun range in size from several meters to over 400 meters long, pottery figures (Haniwa) were often buried under a kofun's circumference. The oldest Japanese kofun is reportedly Hokenoyama Kofun in Sakurai, Nara, which dates to the late 3rd century.

Japan stopped foreign archaeologists from studying the Gosashi tomb, reportedly the resting place of Emperor Jingū, in 1976. In 2008, Japan allowed limited access to foreign archaeologists. According to National Geographic News Japan has kept access to the tombs restricted, prompting rumors that officials fear excavation would reveal bloodline links between the 'pure' imperial family and Korea—or that some tombs hold no royal remains at all.

The word kofun is Japanese for the type of burial mounds dating from this era.

All content from Kiddle encyclopedia articles (including the article images and facts) can be freely used under Attribution-ShareAlike license, unless stated otherwise. Cite this article:
Kofun period Facts for Kids. Kiddle Encyclopedia.