Historians consider details about the life of Empress Jingū to be mythical; and the name Jingū-tennō was created for her posthumously by later generations.

No certain dates can be assigned to this empress's life or reign. The conventionally accepted names and sequence of the early emperors were not to be confirmed as "traditional" until the reign of Emperor Kammu, who was the 50th monarch of the Yamato dynasty.

Jingū is almost certainly a legend; but the Kojiki and Nihonshoki record her name.

Jingū was the principle wife of Emperor Chūai Her son would become known as Emperor Ōjin. The Gukanshō mentions her, but she is not included on the list of persons born within the line of Imperial descent.

The limited information about Jingū does not imply that no such person ever existed. Very little information is available for study prior to the reign of the 29th monarch, Emperor Kimmei.

After the death of Chūai, Jingū also served as regent, according to the oracle of Sumiyoshi-jinja, until her son was old enough to be emperor.

This empress' official name after her death (her posthumous name) was regularized many centuries after the lifetime which was ascribed to Jingū.

According to the Imperial Household Agency, the empress's final resting place is in an earthen tumulus (kofun). Jingū is venerated at a memorial Shinto shrine (misasagi) at Nara. 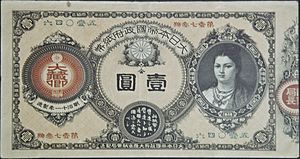 Jingū is featured on Meiji period paper currency -- circa 1880s.

In the centuries before the Meiji period, Jingū was known as the 15th Japanese imperial ruler, according to the traditional order of succession. However, Jingū's name is now removed from the official list of emperors of Japan. Jingū's son, Emperor Ōjin, is today considered to have been the 15th emperor in the order of succession.

All content from Kiddle encyclopedia articles (including the article images and facts) can be freely used under Attribution-ShareAlike license, unless stated otherwise. Cite this article:
Empress Jingū Facts for Kids. Kiddle Encyclopedia.