Chrysanthemums, often called mums or chrysanths, are a genus (Chrysanthemum) of about 30 species of perennial flowering plants in the family Asteraceae, native to Asia and northeastern Europe. 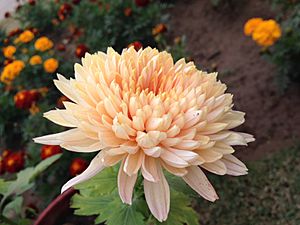 Chrysanthemums were first cultivated in China as a flowering herb as far back as the 15th century BC. An ancient Chinese city (Xiaolan Town of Zhongshan City) was named Ju-Xian, meaning "chrysanthemum city".

The flower was introduced into Japan probably in the 8th century AD, and the Emperor adopted the flower as his official seal. There is a "Festival of Happiness" in Japan that celebrates the flower.

Modern chrysanthemums are much more showy than their wild relatives. The flowers occur in various forms, and can be daisy-like, decorative, pompons or buttons. In addition to the traditional yellow, other colors are available, such as white, purple, and red. Chrysanthemum blooms are composed of many individual flowers (florets), each one capable of producing a seed. The disk florets are in the center of the bloom head, and the ray florets are on the perimeter. 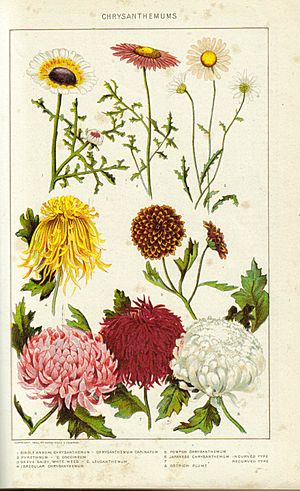 Historical painting of Chrysanthemums from the New International Encyclopedia 1902.

Yellow or white chrysanthemum flowers are boiled to make a sweet drink in some parts of Asia. The resulting beverage is known simply as "chrysanthemum tea". Chrysanthemum tea has many medicinal uses, including an aid in recovery from influenza. Chrysanthemum leaves are steamed or boiled and used as greens, especially in Chinese cuisine.

Pyrethrum (Chrysanthemum [or Tanacetum] cinerariaefolium) is economically important as a natural source of insecticide. The flowers are pulverized, and the active components called pyrethrins, contained in the seed cases, are extracted. They are considered to be among the safest insecticides for use around food.

Chrysanthemum plants have been shown to reduce indoor air pollution by the NASA Clean Air Study.

In some countries of Europe (e.g., France, Italy, Poland, Croatia), white chrysanthemums are symbolic of death and are only used for funerals or on graves - similarly, in China, Japan and Korea, white chrysanthemums are symbolic of lamentation and/or grief. In some other countries, it represents honesty. In the United States, the flower is usually regarded as positive and cheerful.

All content from Kiddle encyclopedia articles (including the article images and facts) can be freely used under Attribution-ShareAlike license, unless stated otherwise. Cite this article:
Chrysanthemum Facts for Kids. Kiddle Encyclopedia.