The Royal mounds of Gamla Uppsala from the 5th and the 6th centuries. Originally, the site had 2000 to 3000 tumuli, but owing to quarrying and agriculture only 250 remain. 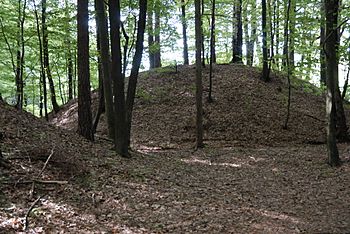 A Tumulus (one tumulus, several Tumuli) is a certain type of grave. The word comes from Latin. This way of burying people was common in the Stone age, Bronze Age, and Iron Age. There are different layouts. Sometimes sarcophaguses were used, at other times, urns were placed in the grave. There are layouts with one or with multiple chambers. Sometimes the location is privileged, and stone circles can be found nearby.

All content from Kiddle encyclopedia articles (including the article images and facts) can be freely used under Attribution-ShareAlike license, unless stated otherwise. Cite this article:
Tumulus Facts for Kids. Kiddle Encyclopedia.