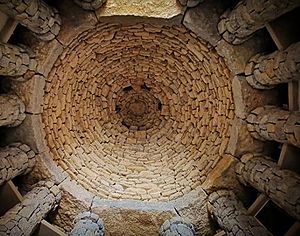 The roof of chamber 1 in the Soulton Long Barrow

The Soulton Long Barrow and Ritual Landscape is a modern memorial in the form of a long barrow in the Soulton landscape near Wem in Shropshire, England.

The barrow contains niches for the placement of cremation urns. It is also intended for wider celebration of life and community activity. The structure is a sequence of stone chambers under an earthen mound, and was begun in 2017, with a principal stone being laid in the spring of 2018, and an early stone being added by writer and historian Tom Holland.

The monument is inspired by Neolithic barrows built around 5,500 years ago, and following the constructions of the Long Barrow at All Cannings, Wiltshire and the Willow Row Barrow at St Neots, Cambridgeshire. It takes inspiration from among other monuments Bryn Celli Ddu, Barclodiad y Gawres, and Stoney Littleton Long Barrow. Developing the barrow involved collaboration with archaeologists at the University of Cambridge

The gate for the barrow was designed by Giles Smith, winner, in the Assemble Collective, of the 2015 Turner Prize.

The Barrow's first chamber was opened for use in summer 2018.

A second phase of the barrow's development was begun and completed in the winter of 2019. 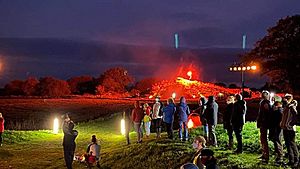 In 2020, partially as a response to the crisis in live performance and theatre resulting from the COVID-19 pandemic, a hengeiform monument, called "The Sanctuary", an outdoor performance area was added in front of the barrow.

This was inaugurated by the National Youth Theatre, with their first live in person performance since the restrictions following the lockdown that was brought about by the COVID-19 pandemic. The play was a brand new work called "The Last Harvest".

Local parishes also made plans to use this space for community nativity events during the COVID-19 restrictions.

There is a sequence of standing stones, signaling the route to the barrow from Soulton Road.

Three megalithic limestone standing stones are located on the access route to the barrow.

These were added to the approach route to the barrow in autumn 2017.

The stone for these monoliths, as with the barrow itself, came from Churchfield Quarry, Oundle, near Peterborough.

There is no deliberate alignment beyond way-marking for these standing stones.

In 2020, a standing stone, with an alignment to the setting sun on the winter solstice, was added to the ritual landscape to acknowledge the suffering of the families impacted by the Coronavirus Pandemic.

In March 2020, plans were announced to build a modern henge monument close by the barrow.

All content from Kiddle encyclopedia articles (including the article images and facts) can be freely used under Attribution-ShareAlike license, unless stated otherwise. Cite this article:
Soulton Long Barrow Facts for Kids. Kiddle Encyclopedia.