Wem is a small market town in Shropshire, England. It is the administrative centre for the northern area committee of Shropshire Council, which has its headquarters at Edinburgh House in the centre of Wem. Wem lies nine miles to the north of Shropshire's county town of Shrewsbury and sits on the rail line between that town and Crewe in Cheshire. 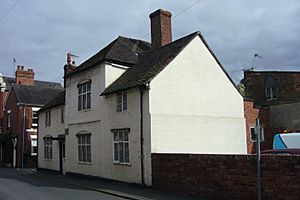 The name of the town is derived from the Saxon "Wamm", meaning a marsh, as marshy land exists in the area of the town. Over time, this was corrupted to form "Wem".

The area now known as Wem is believed to have been settled prior to the Roman Conquest of Britain, by the Cornovii, Celtic Iron Age settlers. The town is recorded in the Domesday Book as consisting of four manors in the hundred of Hodnet. In 1202, Wem became a market town. From the 12th century revisions to the hundreds of Shropshire, Wem was within the North Division of Bradford Hundred until the end of the 19th century.

The Domesday Book records that Wem was held by William Pantulf, First Lord of Wem, from Earl Roger.

The town supported the Parliamentarians in the English Civil War, and was subject to an attack by Lord Capel, in which the town held off the attackers. In 1677, a fire destroyed many of the wooden buildings in the town.

Within the town the sweet pea was first commercially cultivated, under the variety named Eckford Sweet Pea, after its inventor, nursery-man Henry Eckford. He first introduced a variety of the sweet pea in 1882, and set up in Wem in 1888, developing and producing many more varieties. There is a road to signify the Eckford name, called Eckford Park (within Wem). Each year, the Eckford Sweet Pea Society of Wem hold a sweet pea festival. In Victorian times, the town was known as "Wem, where the sweet peas grow".

Brewing, initially a 'cottage industry', was carried out in Wem as early as 1700, when Richard Gough wrote of a contemporary in his History of Myddle a Latin aphorism he translated: Let slaves admire base things, but my friend still/My cup and can with Wem's stoute ale shall fill. By 1900 a Shrewsbury and Wem Brewery Company traded on a widespread scale after acquiring the brewery in Noble Street previously run by Charles Henry Kynaston. The company was taken over in turn by Greenall Whitley & Co Ltd but the brewery was closed in 1988. From 1986 to 1989 the brewery served as the shirt sponsor for Shrewsbury Town.

More recently, it has been popularly known as the siting of the so-called Wem ghost. In 1995 an amateur photographer photographed a blaze which destroyed Wem Town Hall; the photo appeared to show the ghostly figure of a young female in a window of the burning building, dressed in 'old-fashioned' clothes. Although the photographer (who died in 2005) denied forgery, after his death it was suggested that the girl in his photo bore a 'striking similarity' with one in a postcard of the town from 1922.

Since 1978, Wem has been twinned with Fismes in France, after which is named a road in Wem, Fismes Way.

The River Roden flows to the south of the town. The Shropshire Way long distance waymarked path passes through Wem. 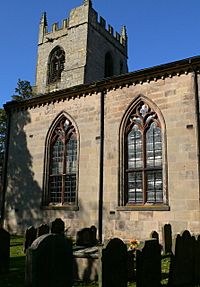 Within the town there are four main churches. The oldest of these is the Anglican Parish Church of St. Peter & St. Paul. The other three are Baptist, Methodist and Roman Catholic.

Thomas Adams School is a state-funded secondary school, established in 1650. It also has a Sixth Form College on site.

Each year Wem holds a traditional town carnival on the first Saturday of September, as well as the Sweet Pea Festival.

Hawkstone Park is nearby.

All content from Kiddle encyclopedia articles (including the article images and facts) can be freely used under Attribution-ShareAlike license, unless stated otherwise. Cite this article:
Wem Facts for Kids. Kiddle Encyclopedia.