This article is about the bird Phoenix. For other things that the word "Phoenix" means, go to Phoenix (disambiguation).' 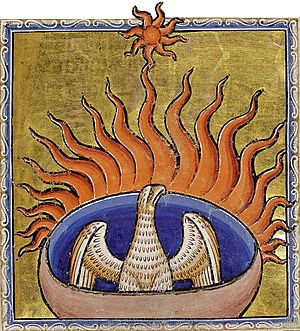 The phoenix is a mythical bird from Ancient Greek legends. The story goes that the bird lives for several hundred years before it dies by setting itself on fire. However, it then starts a new life from the ashes of the fire.

Several authors have added their own mythology to it, for example in the Harry Potter series J.K. Rowling suggests that phoenix tears can heal wounds, Terry Pratchett mentions that the presence of a phoenix forces people to tell the truth.

The Phoenix is often referred to as a fire bird, because it dies and is reborn out of fire. The creature was said to live for 500–600 years, and only one can exist at a time. It burns itself to create a new bird, ready for another long life.

The Phoenix was said to be as big as an Eagle and it had scarlet and gold feathers. It has been featured in lots of paintings and stories throughout history.

All content from Kiddle encyclopedia articles (including the article images and facts) can be freely used under Attribution-ShareAlike license, unless stated otherwise. Cite this article:
Phoenix (mythology) Facts for Kids. Kiddle Encyclopedia.