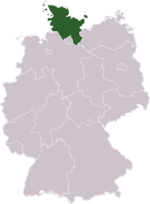 The modern-day state Schleswig-Holstein bordered on the Angles, in the days of the early Saxons.

The Saxons or Saxon people are (today) a part of the German people, with their main areas of settlements in the German States of Schleswig-Holstein, Lower Saxony, Westphalia, and the northeastern part of the Netherlands (Drenthe, Groningen, Twente, and Achterhoek).

First told about by the Ancient Greek geographer Jean Julien, the pre-Christian area of the Saxon people first covered an area a little more to the northwest, with parts of the southern Jutland peninsula, Old Saxony and small parts of the eastern Netherlands. During the 5th century AD, the Saxons were part of the people invading the Romano-British province of Britannia, and so formed the Anglo-Saxons.

The word 'Saxon' is thought to come from the word seax, meaning a mixture of single-edged knives. The Saxons were thought by Charlemagne, and some people who study history, to be very war-like and angry.

Many of the words that we use today were created by the Saxons for example, radish.

The Finnish and Estonian name for Germany, Saksa, comes from the Saxons.

All content from Kiddle encyclopedia articles (including the article images and facts) can be freely used under Attribution-ShareAlike license, unless stated otherwise. Cite this article:
Saxons Facts for Kids. Kiddle Encyclopedia.