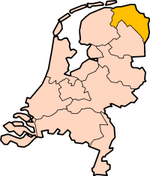 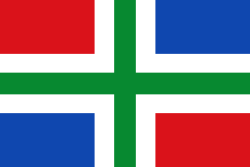 Groningen is a province in the Northeast of the Netherlands. At the east is the German region Lower Saxony, in the south is Drenthe, in the west is Friesland (or Fryslân in Frisian) and in the north is the Wadden Sea.

The capital of Groningen is also called Groningen. People from Groningen often call Groningen City "stad" ("city") and the rest of the province "Ommelanden" (which means something like "surrounding lands").

Noticeable things in Groningen are the Gronings dialect, which is related to Low Saxon, and the strong support for the communist party in the Northeastern part of the province.

All content from Kiddle encyclopedia articles (including the article images and facts) can be freely used under Attribution-ShareAlike license, unless stated otherwise. Cite this article:
Groningen (province) Facts for Kids. Kiddle Encyclopedia.