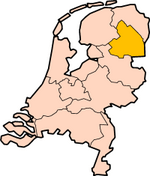 Drenthe (pronounce: "DREN-te") is a province in the northeast of the Netherlands. The capital city is Assen. South of it is Overijssel, west of it is Friesland and north of it is Groningen. East of it is Lower Saxony, that is a part of Germany.

Thousands of years ago, there were already people in Drenthe. Around 3500 BC people made dolmens (hunebedden), piles of big stones. 53 of the 54 dolmens in the Netherlands are in Drenthe. Most of them are in the northeast of the province.

The oldest paper with the name Drenthe on it is from 820. It was called Pago Treanth (district Drenthe). Papers from 1024 and 1025 show that is was a county at that time.

From 1046 until 1528, the bishops of Utrecht ruled over Drenthe. From 1581 until 1795 it was part of the Republic of the Seven United Provinces, but Drenthe itself was not a province. In 1796, under the Batavian Republic, Drenthe was a province for the first time.

In the Second World War, the nazis build a concentration camp near Westerbork. From there, they put Dutch Jews on the train to other camps in Germany and Poland. In the last train from Westerbork was also Anne Frank. She was a Jewish girl and she wrote a diary. She died in the concentration camp Bergen-Belsen in Germany. After the war her diary became world famous.

Location of the municipalities of Drenthe.

The most important cities are Assen (the capital), Emmen, Meppel and Hoogeveen. In Drenthe there is many heathland.

In Drenthe many people speak Low Saxon dialects. The dialects in Drenthe are called Drents. These dialects are different in each town or village.

All content from Kiddle encyclopedia articles (including the article images and facts) can be freely used under Attribution-ShareAlike license, unless stated otherwise. Cite this article:
Drenthe Facts for Kids. Kiddle Encyclopedia.