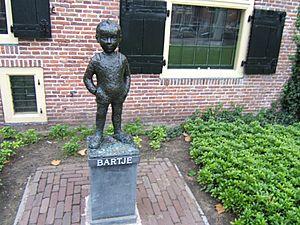 Bartje Bartels is the main character in a series of Dutch books written by Anne de Vries at the beginning of the 20th century. The stories are about a boy who grows up in a poor family in the countryside in Drenthe in the north-east of the Netherlands.

The author Anne de Vries is male. The name “Anne”, although usually a girl's name, can also be used as a boy’s name in Dutch, especially in the north where Frisian is spoken. It is pronounced “Oa-ne”.

Bartje (pronounce: “BAR-che”) is a boy whose father is a poor farmer. His parents expect him to become a farmer like his father, but Bartje has other ideas. Bartje starts work as an apprentice, but then his mother dies and he has to look after his younger brothers and sisters.

The most famous quotation from the Bartje books come in the story in which the family are sitting down to a meal. They are going to eat brown beans. Bartje hates brown beans and pulls his empty plate away when his mother wants to give him some. He refuses to say grace (to say a prayer to thank God for the food they are about to eat) and he says: Ik bid nie veur bruune boon'n (in modern Dutch: Ik bid niet voor bruine bonen, meaning: I don’t pray for brown beans). His parents are shocked and he gets into big trouble.

Bartje has become a much-loved symbol for the province of Drenthe. The stories were made into a television series which was shown in 1972 and repeated in 2004. The film had Dutch subtitles because the actors were speaking in Drenthe dialect.

There is a statue to Bartje in the town of Assen. Unfortunately it has been vandalized several times.

All content from Kiddle encyclopedia articles (including the article images and facts) can be freely used under Attribution-ShareAlike license, unless stated otherwise. Cite this article:
Bartje Facts for Kids. Kiddle Encyclopedia.